Here Are the Winners of the "Best Character Death" Contest 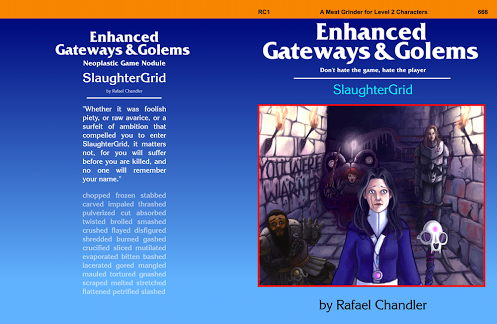 It took some time to sort through all of the "Character Death Entries". Much like the S&W Appreciation Day Blogfest, there were just so many great entries to choose from.

"Choosing three winners was an impossible task. I was astonished by the creativity, brutality, and hilarity of these entries, and I was also delighted by the sheer number of participants. Thanks to everyone who contributed, and if you didn't get your complimentary PDF copy of Roll XX or Roll XX: Double Damage, please let me know! And many thanks, Erik, for hosting!"﻿

So, Rafael whittled the list down to a "10 Best" and then we whittled that down to the top 3. In no particular over, our top three are:

I've got a pretty good one. This happened in the Mysterious Temple of the Serpent God. The characters had defeated a nasty electrical trap, and opened the door to the Vault of the Frosthammer. After winding their way down a long and winding series of staircases (with absolutely no traps whatsoever), they had been lulled into a false sense of complacency. The final set of stairs let out on a longish corridor leading up to a door.

Here's the thing. Right in front of that door was a 30 foot deep pit trap, with iron spikes at the bottom. The trap extended for 30 feet along the corridor, nearly to the door at it end. As if that's not enough, the ceiling above the trap was false, rigged to release an avalanche of boulders. I'd set this up to be at least somewhat obvious to anyone who took the time to look. Unfortunately, we were accompanied by Vane Barbute, the chaotic warrior, who charged ahead, ready to examine the door. That was par for the course. He does this sort of thing all the time. This time, though, two other characters followed right behind him, both clerics. In fact, the party's only clerics.

I gave them all a chance to make a reflex save. Guess who made it? Right. The guy who caused the trouble in the first place. The clerics fell in the pit as the ceiling also collapsed right on top them. They took something like 6d6 damage (and they were first level guys at the time). Vane, though, was virtually untouched.

In the end, though, DCC's "turn over the body" rule was invoked. They dug out their companions who both, miraculously, made a Luck check to be not-dead. By all rights, they should have been DEAD, as +Harley Stroh can attest, but I'd already agreed to the rule. Live and learn (to kill better).

That has to be one of my favorite traps of all time. Misdirection and a whole lot of brutality. I was sort of sad that nobody noticed the pit trap, because the boulders would also be triggered by a plate in front of the door, which was separate from the pit trap itself, and would have (most likely) taken out the whole party.

Caves of Chaos. First time player, first character, a wizard. They avoided the pit trap going in, but... the kobolds have a paper mache boulder full of hornets.

So as they flee the boulder, the wizard fails the jump. She falls through the pit lid, rolling 4 damage from a 10 foot fall--which kills her.

She also landed on spikes. And was carrying the torch. So when the massive paper mache boulder cracked on her and swarmed her corpse with stinging hornets, then the paper mache caught fire and merrily burned her corpse.

The player erased the name on the top of the sheet and wrote a new one in. Welcome to D&D.

The following happened in a Middle-Earth Role Playing session way back in the 1990s:

Our group stumbled upon an agent of Sauron speaking to a large group of villagers who was turning them against us. I looked down at my character sheet and saw, for whatever reason, that my character had "Public Speaking" as a skill, so I foolishly tried to persuade the audience to our side. I critically failed my roll.

The villagers swarmed me with a motley arrawy of weapons before moving on to the rest of the group. I vividly remember my character getting...
...his jaw broken and stunned
...struck to thigh causing a broken hip
...one eye destroyed, and stunned
...struck on the head, more bleeding, more getting stunned
...a blow to my arm, breaking it

A few more of the villagers still needed to attack me, but the GM stopped rolling at that point. My character was as good as dead. None of those criticals outright killed my character or knocked him unconscious, so he was very much alive and awake as the villagers bludgeoned him to death.

Besides, combat in MERP can take quite a bit of time with all of those combat charts--especially when mulitple characters do multiple criticals. And there were other characters who needed to die.

Somebody else got cut down and pretty much dismembered by the villagers--once again, multiple criticals.

The agent of Sauron severed another character's lower leg. The character was trying to run away.

I remember that there were two survivors. One was a hobbit. Hobbits are seemingly invulnerable in MERP, but I think he even he took a hit. The other was a human or an elf who feel unconscious from blood loss.

The game, and the campaign as I recall, ended with trying to figure out how the hobbit could carrying the wounded character to safety.

So, not only did I get my character brutally killed, but more than half the group as well, pretty much ending the campaign.

So, the above 3 need to follow Rafael's directions below. There are still 3 random posters to pick, which should get done either tonight or tomorrow. I'll post them when we have them.


The three winners will get free books -- just pick a book from the list below and I'll mail you a copy. (I'll also email you the PDF.)

Hit me up at rafaelchandler (I use gmail).