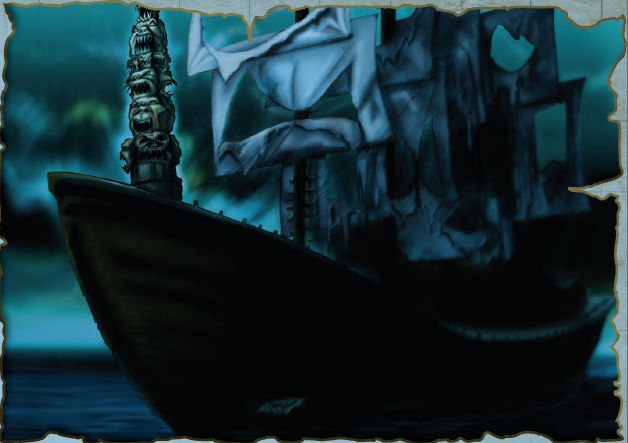 The deeper I look into the Razor Coast PDF for Swords & Wizardry (in all of it's 426 pages of glory) the more hidden gems I find.

I was under the impression there weren't any adventures or hooks included for beginning adventurers, and lo and behold I find "Mysteries of the Razor" tucked in starting at page 325.

I think it does a fine job of setting the tone for the Razor Coast setting (repetitious writing on my part, I know). The players start at sea and encounter, for lack of a better phrase, a ghost ship. If they had any doubt that they would be spending a significant amount of time on the sea, this should open their eyes.

There's a bit of plot heavy handedness to it as written, but there is also some well presented options to lessen the weight of it. It is a good adventure as written (as a one shot I'd even say excellent) but following the advice given it should work out as a great campaign starter.

One thing I would suggest, and I think I will plan to do in all games I run, is to ask for 10 "saving throws" thrown in advance for each PC. Record them in order, then roll a D10 to determine the starting point when needed. Cross them out as used. It prevents the need for the DM to roll saves for the PCs in secret, which I never liked as a player and try to avoid as a DM.

There is also a Frank Mentzer adventure included in the mix - "Dark Waters" - which is for 3rd or higher level characters. Although it doesn't take place directly in the Razor Coast area but it's outer boundaries, I'd like to see if it's suitable for use when I kick off the Razor Coast campaign sometime this summer. I still need to work on a follow up to "Mysteries of the Razor", but that shouldn't be too hard so long as I make it more "plot" and less "structure", so the payers have a decent amount of wiggle room.

See, it's a good thing I finally allowed myself to bounce around the Razor Coast PDF for a bit ;)