Help Pick the Winner of the "Detail a Pirate Captain For Use in the Razor Coast"! 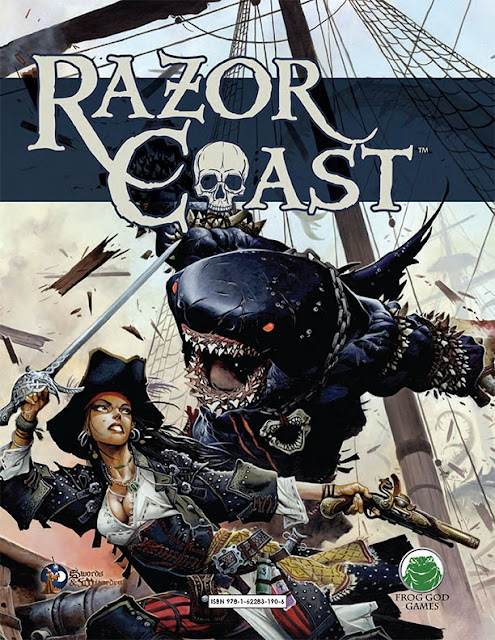 There were some amazing entries. I found myself severely aggravated that I limited my selection of finalists to only three choices, as it could have easily surpassed a half dozen. Lads and ladies, y'all fucking rock! You know what it takes to make a great pirate :)

In any case, I was limited to three choices and these are them. It certainly wasn't an easy task to whittle down the list to three, and now, my dear readers, I'm putting the task on you to chose "The One".

The first place vote getter receives a copy of the Swords & Wizardry version of the Razor Coast in PDF thanks to the generosity of the fine folks over at Frog God Games.

The two runner ups get gift certificates to RPGNow, curtesy of the fine blog readers that use my affiliate links and put cash in the kitty for events like this. 2nd place gets a $10 GC and third place gets a $5 credit.

One random voter will also get a $5 RPGNow gift certificate, as my way of thanking you for participating in this difficult but rewarding endeavor.

You may pick up to two of the finalists to vote for, a first place vote (3 points) and a second place vote (1 point). I'll tally up the points at the end of the voting and award the prizes.

Voting commences immediately and will end on Tuesday, May 21st at 7pm NYC time.

You cast you vote by commenting on this post.

Here are the finalists:

He’ll take your silver, gold, n’ magic things
If you get in his way, you’ll be a blood stain
from the isle of Haht to the great Port Shaw
Ruthless Jack’s will plunder them all

The Bloody Haar is a two masted schooner, with a red stripe running the length of her black hull. Her sails are a sun and salt faded scarlet, and she flies a pitch black pennant. While a relatively small ship, she’s one of the nimblest and fastest that prowls the Razor Coast.

(listen to the above here)

Prior to a raid, the Masked Mage will wreath the area in fog, allowing the Blood Haar to close upon her prey unseen. The rest of the crew will then board their target, eliminating any resistance with extreme prejudice, but not needlessly slaughtering anyone who doesn't get in their way. Their goal is always the loot.

“Ruthless Jack” is a large, broad shouldered bald orc with sun darkened olive green skin and a wiry black beard. He is covered with bright tattoos across his chest and down his arms, and fights with a magical harpoon in one hand, and a hand ax in the other. He’s been a pirate nearly his whole life, sailed the length and breadth of the Razor Coast, and when the Masked Mage offered him command of the Bloody Haar, he lept at the chance. The last 5 years have proven the wisdom of the Masked Mage’s choice.

The Lady d’Rath was the 1st officer under the Bloody Haar’s previous captain, and was initially pissed that the Masked Mage passed her up for the position. SkarJak’s success only infuriated her more. Eventually she challenged him to a duel, and lost, though it was a close thing. SkarJak asked her to remain on the ship as his first officer. Their relationship remains tense.

The Masked Mage is an unknown to all. Clad from head to toe in flowing embroidered robes, with an elaborate facemask that lacks any holes, his voice is low and raspy. Over his robes he wears The Medallion of the 9 Winds, the item which allows him to both call forth the fog, but also to influence the wind, further assisting the Bloody Haar in being one of the fastest vessels upon the sea.

The Mad Priest of Shebaba, and his vessel, the sepulcher of Shebaba.

The mad priest was once a totally sane priest of another religion entirely, until Shebaba washed ashore, a sea monster of sorts which happened to look an awful lot like the creature of his most recent nightmares. The priest (once named Ulful, now simply known as the mad priest) became obsessed with the rotting mass he'd dubbed a she.

As his mental illness took hold, and he was being held in his quarters, the subjects of his abandoned parish made plans to cast Shebaba into the sea. Driven mad with what he calls "The essential cleansing of soul and sanity" Ulful had the strength of a hundred men, and earned his new name slaying the majority of his former flock. Enslaved by The Mad Priest the people of the small port city built a craft of strong wood and stronger sea monster bones and ichor and took to the sea with their subjugator/church father, riding the very mausoleum of their goddess.

The Sepulchre of Shebaba sets to port often, she is given wide berth by other vessels, and the port villages and cities seal their doors so as not to be taken to crew the vessel. The vessel is crewed by the enslaved, the mad, or the half demon spawn of those creatures the Priest summons to breed with the insane and the slaves.

The Mad Priest is a 8th level chaotic cleric, Shebaba is dead but her Ichor seems to have the stuff of sapience infused into its essence and her torment bleeds through into the psychic plane, leading to madness if a daily save against her forces isn't made successfully.


The Ghost is the ship. Captain Cleaver Blackshaw rules his ship with two black pistols gifted to him from the Siren, Suleela. He'd captured her family during a raid upon the fey lands and she swore to be with him if he released her family. He was given the black pistols on their wedding night and to consummate their marriage he killed four of his crewmen who dared to speak against the union. The pistols are linked with the ship, each death is captured within the the soul of the ship and a strange rune appears on its boards. When attacked these captured spirits defend the ship and assist it in defense and healing itself. When the spirit is depleted of energy the run fades.

Cleaver Blackshaw was always the leader of men. He was raised on the streets within the largest city. He led a gang of boys that soon gained the attention of guards and guilds alike. They were able to capture and disrupt, spend and kill because of the uncanny ability of Cleaver. It wasn't until he encounter an upstart noble, son of the Overlord, did he question his luck. Killing the boy had been a simple matter. He'd been trained by the best, but had never been in a real fight. It was the backlash that wiped out his entire gang. He stowed away on a ship. Was found. Before the crewman could wrangle him and present him before the captain, Cleaver strangle then man then sliced off his head with a dull knife and presented it before the captain himself and said "I'll take his job".

It was on this ship that he learned of the spirit world and of magic. Cleaver found it fascinating and imagined what a weapon it would be if he could ever harness both.

With The Ghost and his black pistols he has ruled the seas for over two decades. Taking as he pleased. Most ships would dump their cargo overboard than battle him. But it is Suleela, who stands at the bow and sings to the ships that draws them to their inevitable doom.