What Three Free OSR RPG Products Would You Suggest For a "Lapsed" Gamer?

I've been thinking of this for a while: What would be the three OSR RPG products I would steer a retuning or "lapsed" gamer towards? We have such an abundance of free (and inexpensive) RPGs to choose from in our corner of the RPG universe, which can be as much curse as boon when one first looks.

So I figured I'd put together a 3 pack that would allow a returning gamer to get his feet wet in the OSR without being overwhelmed. My picks are below. Nothing states my picks are the only ones or even the best ones. Part of my thinking was a single system for all three products. Yes, everything in the OSR is extremely compatible, but I wanted to simplify things as much as possible.

Labyrinth Lord (no art version) - It was a toss up between LL and Swords & Wizardry. LL has the Advanced Edition Characters book freely available in a no art version, so they could make their campaign more AD&D like without having to pay for a new rulebook like you would with Swords & Wizardry Complete.

Blackmarsh - I'm not sure how many freely available campaign settings there are in the OSR, but this is professionally done and has the makings of one heck of a hexcrawl if the DM so desired. 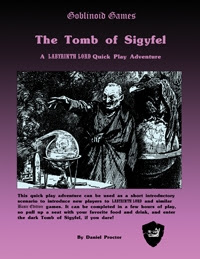 Tomb of Sigyfel - A short and simple dungeon adventure. Short enough to be finished in a 2-3 hour session, it shouldn't overwhelm a returning DM.

What "Free OSR Three Pack" would you assemble for a returning player or DM. Would it be different than what you would give to a totally new player to the hobby? Why?

Give me your picks and we'll add to this page.

1) Labrynth Lord - its really close to the original, with excellent free support
2) Dungeon World - I love this game, and the narrative style may be a better fit for a lapsed player.
3) Stars Without Number - Maybe they played Star Frontier's or Traveller? Its a good system.

I'd also recommend the OSR Premier as an excellent guide for new and rusty Rpgers.

I would have a hard time arguing against any of those choices. My 3 would be.
1. Swords & Wizardry Core
2. Blackmarsh
3. While Tomb of Sigyfel is great I think I would go with the one-page dungeon collection.

1. BFRPG core rules - To me its OSR minus the descending armor class..and I like that its completely open source..
2. BF1 - Morgansfort: Very Keep on the Borderlands. Some small beginner adventures along with a small keep that the adventurers can base their exploration from.
3. AA1 - Adventure Anthology: A compendium of different adventures that could take a party from beginner to mid-level.

1. Labyrinth Lord
2. Mutant Future
3. Stars Without Number
Those cover the OSR experience pretty nicely, and each has the feel and familiarity of the most popular classics (B/X D&D, Gamma World, Traveller)

1. Labyrinth Lord
2. The Endless Tunnels of Enlandin off Dragonsfoot, for use with LL.
3. Mutant Future would be a good intro to the non-D&D side of the OSR.

Two radically different ways to play a game under the same rules. ﻿