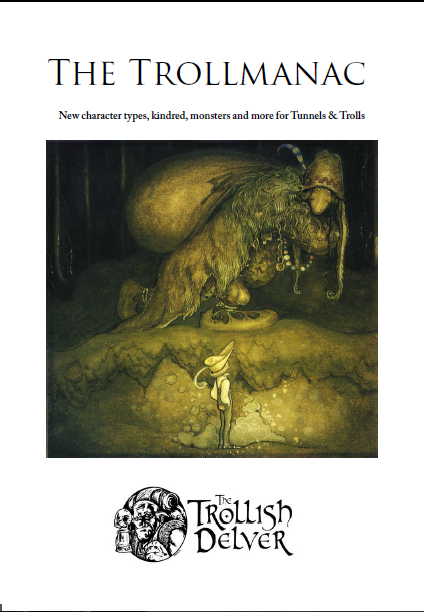 The Trollish Delver, otherwise known as +Scott Malthouse , is a pretty prolific writer of T&T blog posts and has a selection of T&T solos available on RPGNow. His latest T&T piece is The Trollmanac.

The Trollmanac is like a T&T buffet. There lots of options and lots of stuff to try out. Some may not appeal to you, but there is enough ere that every T&T player should feel they've gotten their $1.59 worth (which is the current sale price and it's a steal!)

Let me look at it in order:

New Classes - Very hit or miss to me, but the hits are solid. I really like the Minstrel, Burglar and Wildfarer classes. When I get that once a month T&T game off the ground, I expect I'll include them as player options.

Character Options - As Scott explains it, these aren't new classes, but ways to tweak existing classes into different roles than expected. If your players are into role playing and not just rolling, they should read this, even if just for ideas on their own tweaks.

New Monsters - as I've been putting one up a day on my blog, you know I love new and unique T&T monsters. Foe me, this section is worth it on it's own.

Magic Items - some good, some average, but enough entries to make it interesting. Watch out or I'll trim your hedges!

- Playing Vampires - not really my interest

- Spicing up combat - Scott, you got me thinking about using Mighty Deeds from the DCC RPG in T&T. I may need to write this up.

- A Guide to Uroks - a nice little write up on the master orks ;)

- Sea Adventures - short but useful. it could add some spice when taking the delvers out of the tunnels