Technical Review - B1: In Search of the Unknown (PDF) 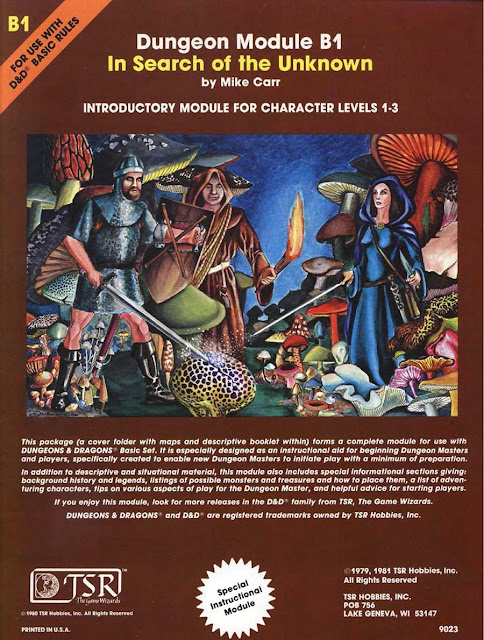 I'm calling this a "technical" review because most folks that are reading this own or have played or at the very least have heard about B1: In Search of the Unknown. So, I'm not talking about the adventure, I'm talking about the PDF quality of the newly re-released B1 over at OneBookSelf / RPFNow / DnDClassics.

I don't recall much about the original scans before the purge, in the way back when WotC decided that electronic media was bad, and pirates ruled the roost except that they were frequently of poor quality. When I say poor quality, I mean poor. Muddy scans were par for the course, and many seem like they were rush jobs put out there to make a quick buck (kind of ironic, in a way, as the current PDFs are certainly being put out there to make a quick buck - edit a "quality" quick buck ;)

So I was pretty surprised at the quality of the B1 scan. Fairly crisp and definitely clean. It's also bookmarked, which I can'r recall if that was part of the first round of scans, but it is certainly appreciated.

Check it out yourself as it's absolutely free. I'll probably check Deities & Demigods next, as that on the pay side, and I want to make sure other 1e stuff is of similar quality scans. Then I'll move on to 2e stuff.
Posted by Tenkar at 5:36 PM