Trollish History - From Yassa Massa! to Spirit Mastery - The Evolution of a T&T Spell Over the Editions 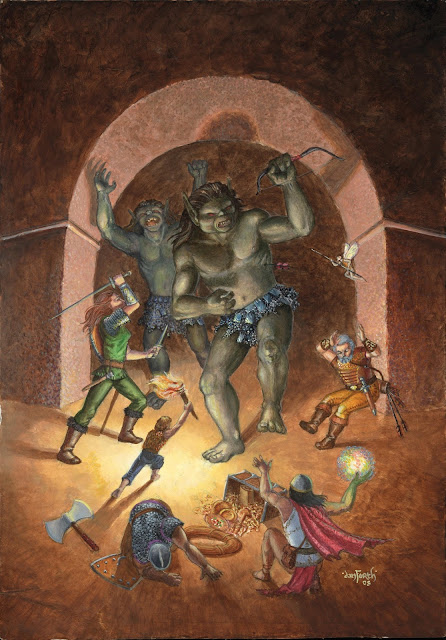 I originally posted this in February of 2011, but it seems like a fun one to revisit, what with the Deluxe Tunnels & Trolls Kickstarter having launched last night.


Troth asked earlier this week if 2nd level Spirit Mastery spell in the 7e Tunnels & Trolls rules had it's roots in the 2nd level Yassa-Massa! spell from earlier editions. So I opened up my copies of earlier editions to take a peek.

T&T 1e: Yassa-Massa! To be used only on previously subdued monsters / foes. Total strengths I.Q. & Charisma. Will permanently enslave monsters with with ratings lower then the above total.

T&T 2e: Yassa-Massa! To be used only on previously subdued monsters / foes. Total strength, I.Q. & Charisma. Will permanently enslave monsters with with ratings lower then the above total.

T&T 3e (1st UK ed): Yassa-Massa! Previously subdued Monsters or foes are permanently enslaved if their Monster Ratings are lower then the combined Strength, I.Q. and Charisma of the caster. Monster must have surrendered or lost half his Constitution or M.R. for Spell to work.

T&T 4e: Yassa-Massa! To be used only on previously subdued monsters / foes. Total strength, I.Q. & Charisma. Will permanently enslave monsters with with ratings lower then the above total.

T&T 5e: Yassa-Massa To be cast on previously-subdued monsters / foes. Will permanently enslave if victim's ST, IQ and CHR are less then that of the wizard, or if the MR is less (and remains so).

So, basically, in 1e the foe had to be subdued first. I'm no expert on the earlier T&T rules, so if there are subdual rules in in T&T 1e I can't find them. It's also poorly written and typo'ed, but it was a work in progress back then.

As for 2e, again with the subdued condition I can't find, but at least the spells power can be figured out now.

UK 1e makes sense, explains the condition the monster / foe must be in for the spell to work. I could use this spell

5e is the same - how the heck do you do subdual damage in Tunnels and Trolls editions 1-5? Hey, found an answer dating back to 2001 from Tori Bergquist- I suspect this houserule was well in use, just never made it to the rules. 5.5e has info on "Pulling your punches", but it isn't what the Yassa-Massa spell needs to fulfill it's requirements.

7.5e changes the name and no longer needs the foe to be subdued, which is good, as I don't think 7e has the rules for it either (I'm too tired to check). Oh, and it replaces STR with WIZ in the spell power. Oh, and it may not be permanent - watch out if your WIZ drops during use.

So there you have it, the evolution of a Tunnels & Trolls spell from 1e to 7.5e.