And Just Like That, The Deluxe Tunnels & Trolls Kickstarter Funded - In a Day and a Half 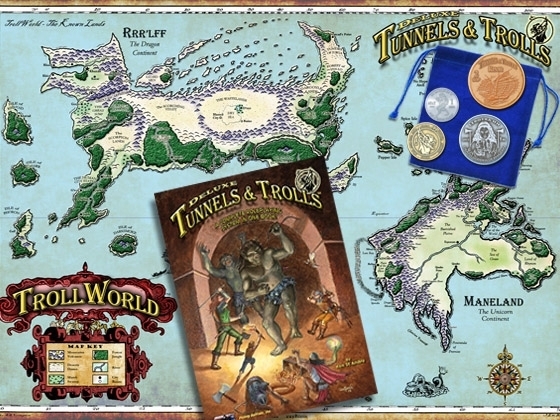 The Deluxe Tunnels & Trolls Kickstarter has surpassed it's $26k (it's actually past $27K right now) goal in a day and a half. It still has 31 days to go.

I think it's safe to say it will fund better then most OSR RPG projects. Beyond that, I make no predictions ;)

I'm happy to see Tunnels & Trolls being brought back from the brink of death without the involvement of a certain unauthorized third party. I'm happy to see so much excitement for a game that has changed little since 1975. I'm happy because I just love the system, okay? heh

Rick has set a release date of August 2013 but actually hopes to ship in June. He might beat Dwimmermount out the door if he hit's June ;)

If Deluxe T&T runs late, or fail to update on a regular basis, I will be sure to shake the tree ;)
Posted by Tenkar at 10:11 AM