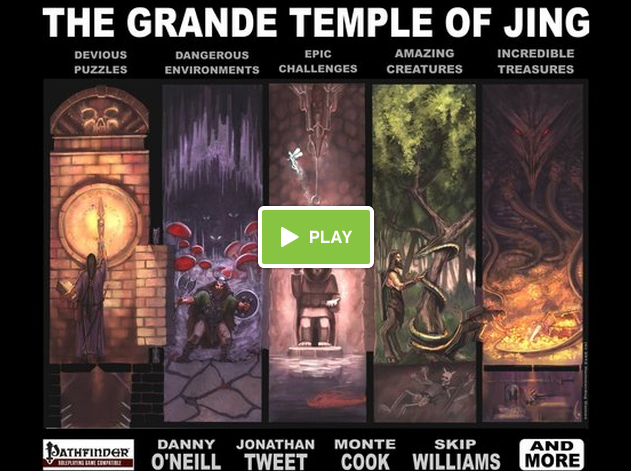 +Jason Paul McCartan brought the following to my attention, and expressed his own thoughts on it over on G+ - I highly recommend you peek at what he wrote, as it is spot on.

Jason pointed out his deal breakers. Me, I see them as insults and hucksterism at it's worst. Kickstarter has always had a bit of of the "but wait, there's More!" to it that reminds me in no small part to whatever the latest infomercial making the rounds is trying to sell.

The Grande Temple of Jing is all that and more. Here, let me start to count the ways:

1 - "You've seen other megadungeons, but this is the dungeon crawl that rules them ALL." Really? Not only do I doubt that, but this statement sets up the rest of the hyperbole that will follow later.

2 - "We are proud to announce that the Grande Temple of Jing will feature several celebrity contributors starting with: Jonathan Tweet,  Monte Cook, Skip Williams - More celebrity contributors will be announced if certain stretch goals are reached." Are we that starved for celebrities in this hobby of ours? Are any of these truly "dungeon creators"?

3 - "Some backer rewards allow people to contribute a monster, treasure, or level to the Grande Temple of Jing. If you choose these rewards, we will work with you to create something unique. Your work will appear in the book, right along with the celebrity contributors we mentioned above!" Awesome, I can pay extra to have my crap published with the crap of others and put next to hopefully not so crappy stuff my "celebrities". Is Vin Diesel going to write a level?

4 - Players will be enthralled (really?) by the many wonders of the grande temple and challenged by its many clever tricks. Magical puzzles, devious riddles, and wondrous magical effects will keep them entertained for hours (can we find a heavier sales pitch?) and allow them to experience the height of dungeoncrawling fun.

Perhaps the best example of Jing's trickery is the resurrection mechanic. You see, Jing draws great amusement from the trials of his guests. So much so that if they entertain him…but die in the process…he will often resurrect them so that they can continue (awesome! they should make a 4e version and then there will be truly Zero Risk of character death) What does this mean to the average player? It means they can seek and find incredible treasures and artifacts - things that they normally only see in their dreams. And if they die in the search - but amuse Jing in the process - he just might grant them a do-over. (yes! a funhouse dungeon without risk! sounds really "old school" to me!)

5 - We LOVE trick filled dungeons, and so do our celebrity contributors. We've armed them with the tools they need to create some FANTASTIC dungeon levels, and we've set them loose in the grande temple. We've asked them to really push the limits and design something that they could never include in a "normal" megadungeon. We can't wait to see what they come up with and we're ready for anything! Are YOU? Are you ready for Jonathan Tweet, Monte Cook, and Skip Williams - UNLEASHED??? (Because you CAN'T CAPITALIZE ENOUGH!!! more celebrity bullshit).

7 - The $20 reward includes "a PDF map of a random level of the adventure (don't tell you GM)". What The Fuck is this bullshit? Why the fuck would I want me players having a map of a level of the dungeon that is NOT gained through play? This is where I get REALLY fucking pissed. Is this what the hobby has come to? Is this bullshit our future?

8 - A part of the grande temple was originally published in 2000 as a thin, digest sized book, compatible with the d20 system. With your help we will update, upgrade, and MASSIVELY expand that book. (Which leads me to believe this is the current state of the project - a thin, digest sized book - soon to be a HUGE mega whimsical whatchamcallit dungeon - not!)

You want a mega dungeon? Try Rappan Athuk, Try Stonehell, Try Barrowmaze, Try Dwimmermount. You want something that seem to recall the goofy and insulting Castle Greyhawk (maybe Jin can bring some animated Gummi Bears to the dungeon) this might be it.

Shit, I feel like a spent time with a used car dealer reading this Kickstarter...