Closing the Tavern Doors - So We Can Open Them in the New Year! 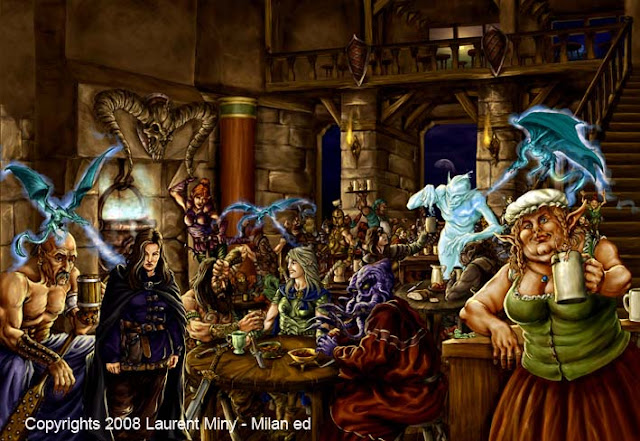 No, we don't really close The Tavern. Why would we? It's like "Cheers!" but with swearing and "Bring Your Own Bottle" constantly in effect.

I figured I should close the year out with a State of The Tavern Update, so here it is, in no particular order or importance:

1 - The Santa Claws as a DCC Patron Contest Prizes will be awarded tomorrow and the ones that need mailing will get send probably over the coming weekend. I love giving away "print prizes", but the logistics is a PITA ;)

We didn't have a huge number of entries, but the quality was uniformly high. After I give out the announced prizes, I'll award the others that entered a pick from The Toys For the Sandbox Series. It's uniformly good stuff.

2 - I still owe a bunch of folks a Labyrinth Lord session and a Blood & Treasure session. I'll work that out over the next few weeks, when I actually have a staff at work (vacations and long term sick has taken the toll on my staff). DM'ing during the week over the next two weeks will result in "Zombie DM". Have no fear, because I plan on running the original Grande Temple of Jing.  It's gotta be good, because Monte Cook says so. John, Monte and Skip wouldn't just be in it for the money, right?

3 - Over the next month, but hopefully sooner, I plan on putting the 2000 Coppers Blog live. Post anonymously if you will. Snark is allowed. Personal attack won't be.

4 - I've got some really damn cool shit brewing with some fairly big "creative types" in our hobby. I'm flattered they even thought of me. I'll announce "substantial shit" when we hit the "substantial shit" phase. Right now I'm in the "giddy school girl" phase. If I hit the "pinch me I'm dreaming" phase, I'll make sure the wife brings me back to reality ;)

5 - As for the 2,000 Coppers Community Room on G+, I have some cash prizes to give out tomorrow. You got to be in the community to win it. We have a $5 and a $10 credit to RPGNow that will be awarded, in addition to the bonus prize for those that entered the DCC Contest.

6 - The Tip Jar Support for Wayward Kickstarters is YOUR tool to support projects YOU deem worthy / insane / bizarre / Synnibarr Crazy. We already have $10 in the Jar. Lets see what we have to play with come Saturday. Remember, I match the money put in the jar - so those 10 bucks gives us $20 to play with.

7 - As always, I'll be keeping the heat on the Overdue Kickstarters, pointing out the good Kickstarters and taking a few whacks at the doozies

8 - I wonder if +Jason Paul McCartan would actually do the podcast we riff about? We might even be able to get some OSR names to appear - as themselves!

If you think I overlooked anything, let me know ;)
Posted by Tenkar at 10:51 PM