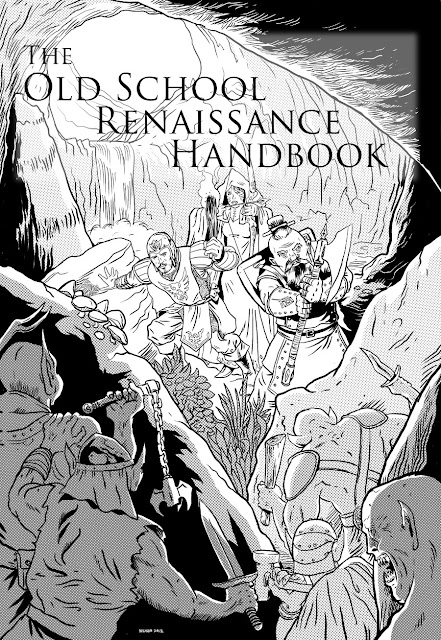 I started "gaming" back around 1980. Stayed active until 1997 but remained as a collector and reader and wanna be gamer. It wasn't until 2007 or so that I actively returned to gaming. Even before I was "returned to active duty", I had found Castles & Crusades and my door to what would become the OSR had opened for me.

I am OSR through and through, and I'll be the first to admit that we have a huge variation of rulesets in our niche of the RPG hobby. When I saw that the Old School Renaissance Handbook had been released, I was psyched. Not because I thought I needed it, but figured it might remind me to take some second looks at rulesets I may have quickly passed over previously. Sometimes having a huge selection to choose from leads you to inadvertently limit your choices.

I'm happy to have been reminded about games like Dungeon Raiders and Dungeon Squad (this was not a reminder - somehow I had never previously heard of Dungeon Squad). It makes me want to take a second look at Microlite74. It does so with a nicely bookmarked PDF and a convenient listing of the games looked at, along with hand links to find them online (and their pricing). Very handy stuff.

I just wish it was more accurate.

I know the OSRIC issue has already been fixed, but the one with Dungeon Crawl Classics is just as large if not larger. 168 pages? 468 is a lot closer. Could it be a possible typo, replacing the "4" with a "1"? Maybe, but then the level limit is listed as 5, when it should be 10. It's 70 monsters in the book (not counting variations and dragons, demons and such), not 16. Add yes, believe it or not it comes with advice for DMs. I suspect someone went from the DCC Beta PDF and assumed it was the full deal. It would have been far better to omit this section all together then to put in inaccurate info.

It's a quick read, especially if you are like me and find stated out characters to be a bit boring after the first few.

Still, the information is good, especially if you want to show an non-OSR friend the different styles of rules available. It's like a "cheat book" of OSR cataloging info. Well, so long as you get the right info. Hopefully corrections are made before this goes to print.  Corrections made!