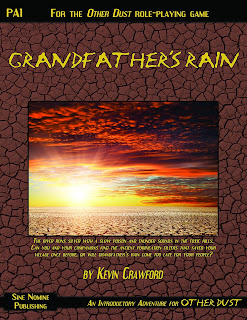 I'm trying to immerse myself in Stars Without Number and Other Dust these days, but even that is hard to do with everything else pulling at my time. Then James Aulds talked to be about running an Other Dust game via the UA-LC for recruiting, and I totally forgot that Sine Nomine Publishing had put out a free introductory adventure for Other Dust called Grandfather's Rain.


They don't give half assed freebies at Sine Nomine - 43 pages long and full of gaming goodness that I can't read yet. At least not until I figure out if I have the free time to sneak into James' game. I might have to console myself with session recaps;


A Shining Doom Has Come To Broketree....

The silver poison has come again. In the days when your grandfathers were young the poisonous eastern hills roared with thunder and sent streaks of gleaming filth down the Sweetwater River. Those who drank of it sickened, but what else were they to drink in this dry land? If a band of brave scouts had not discovered ancient purification filters in the ruins of an Old Terran laboratory, Broketree would surely have withered and died. The filters fell to pieces when your fathers were still boys, but by then the river flowed clean and pure once more.

Now the thunder has pealed again and the silver filth has come once more. The filters are broken and useless. New ones must be found, and quickly, before the enclave is too weak to survive. Yet rumors come from the north that the mud miners of Digger Springs grow sick as well- and what will they do if they find salvation before the warriors of Broketree can again bring grandfather's rain?

Grandfather's Rain is a free introductory adventure for the Other Dust old-school roleplaying game. Fully compatible with the award-winning and free Stars Without Number sci-fi game, Other Dust gives you the tools to build your own savage post-apocalyptic world of monstrous perils and desperate struggles. Within this adventure, you'll find...

Digger Springs, a mud-mining settlement founded to excavate the bones of a buried Old Terran suburb, and a place where Hell's lid sometimes flies off.

The Ashbrook Research Center, a "diagram map" ruin built as an example for new Other Dust gamemasters.

Random tables for quick loot and reward generation, and a layout that lets you keep your focus on the adventure without constantly checking the rulebook
Posted by Tenkar at 7:23 PM