The Definition of a "Sandbox" - Stars W/O Number Style 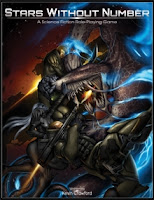 This time with the SWN Core rules, I'm trying to read it straight through two times (I''d already done the bounce around through much of the crunch). I don't remember the following section in the original rules, it could have been there, but my trip was much more haphazard then. What follows is some of the best guidelines and definition of sandbox styled play in an RPG that I can recall (from page 6):

Every character should have a goal from the very start. This might
be something as simple as “become wealthy beyond my fondest
dreams of avarice” or “be known as the greatest pilot in the sector”.
It might be as elaborate as “engineer the downfall of the interstellar
empire that conquered my world”. Whatever it is, it should give
your character an immediate reason to go out and do  something.

This will to act is especially crucial in Stars Without Number ,
because this game is designed to support a “sandbox” style of
gaming. Unlike many other games that encourage the development
of a particular story or the playing out of a specific plot line, Stars
Without Number  presents an entire interstellar sector to your
characters and invites you to choose for yourself how to experience
it. Stories will arise based on what your characters do and how they
respond to the adventure situations provided by the GM.

As a player, you need to cooperate with your GM. This doesn’t
necessarily mean following every lead and hook you’re given
without demurral, but it does mean that you need to respond to
the situations and possibilities that are given to you.

You also need to keep in mind that your adventurers exist in a
very large world that is not scaled to your characters’ abilities. If
you insist on throwing your characters into situations or challenges
that seem overwhelming, the odds are that they will  overwhelm
you. Scouting, reconnaissance, and careful intelligence gathering
will help you recognize no-win situations before you push ahead
into them. By the same token, don’t hesitate to flee if your party
appears to be facing certain doom. A keen sense of when to decamp
the field is often an experienced adventurer’s most valuable asset.

A version of this should be distributed at the start of every sandbox styled campaign no matter the game system. Pretty much spot on.