Something was rattling through my head last night as I tried to sleep. You know the thoughts I'm talking about - nagging questions that hit you right as you're about to fall asleep.

Fact: On every return for the Gygax Memorial Fund (GMF), Gail Gygax claims X hours a week on fund related activities. The yearly breakdown is as follows: (note, everyone that has donated to the fund should review the fund's financial info)

"Gail Gygax looks thinner and walks slower than the last time she brought her plans for a Gary Gygax memorial before the city park commission. A childhood illness that went untreated is now affecting her kidneys and liver, Gygax said in a November interview. Earlier this year, she required surgery and a two-month hospital stay to heal the damage... That work was interrupted this past spring, Gygax said. She said she began to feel ill while preparing to go to a game trade show in Las Vegas. She cancelled her trip at the last moment, and shortly thereafter she was hospitalized. No one else could pick up the slack while she recuperated." From the Lake Geneva Regional News
by Chris Schultz, December 04, 2014 (emphasis mine)

Observation: Gail devoted as much time to the GMF in 2014 as she did any other year according to the 2014 990EZ-Part IV 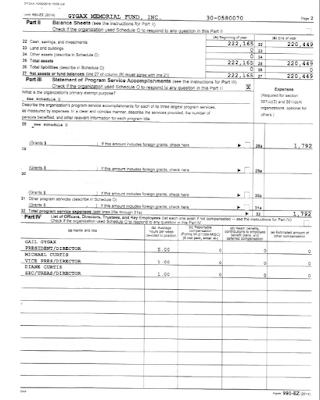 Question: There are two other members on the board of the GMF: Michael and Diane Curtis - They devote 52 hrs a year each to GMF business. Why could they not pick up the slack?