Here's Gail Gygax's latest Facebook post. She specifically asked for it to be shared, so in the interest of fairness, I'm sharing it. 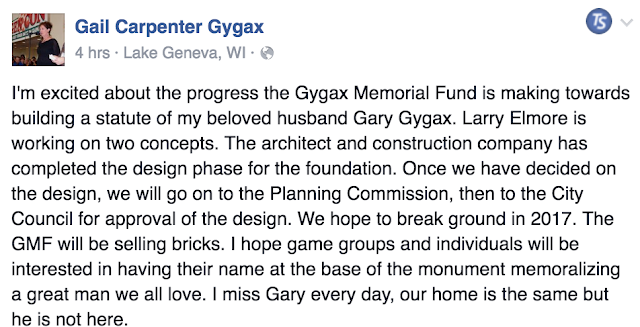 Then there's this in the comments: 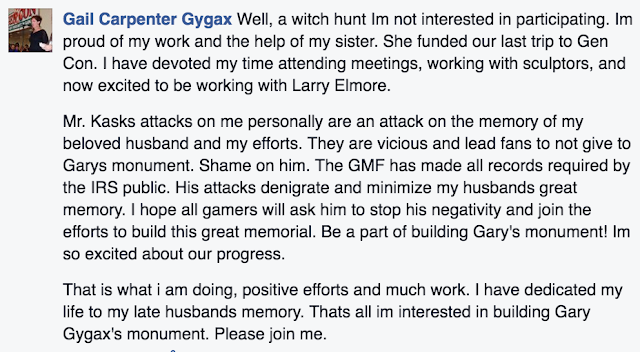 So, why is Tim asking questions? Why are his questions "personal attacks"? Aren't there some records that are supposed to be made public by non-profits under Wisconsin law?

Back on November 30th of last year, this is what I was told: 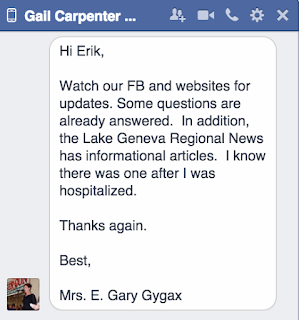 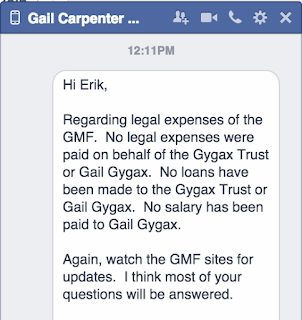 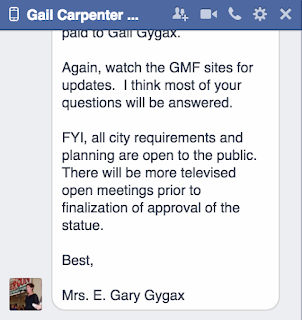 There have been no updates on the fund's site (except for the removal of the names of gaming personalities that were listed as being associated with the Fund. Those that I had spoken with had no idea they were being linked to the Fund). There have been no answers. Today is the first update on Facebook since the community submitted questions via The Tavern for Gail to answer back in November. I strongly suspect without Tim's posting yesterday, we wouldn't have today's update. Whatever reasons Tim had for asking his questions, it resulted in the only Gygax Memorial Fund news in the last 6 months.

I think that the issue here is that many in the gaming community would actually like to donate the the Gygax Memorial Fund, but when they get to the website and see the last piece of news is from 2014, they get the feeling that it's going nowhere. I could be wrong, but when I see the last piece of news is from December, 2014 and there are no other updates except for today's Facebook posting, it's not a sign that instill's confidence in my eyes.

I believe the gaming community wants this monument and they want to believe it will get done. Give them more than words, give them actual progress reports. Show them what is happening, don't just tell them in a Facebook posting.

Gamers might play a game of make believe, but they need evidence to believe in Gary's monument. Give them the evidence for them to believe.

Note: Comments about the Gygax Revocable Trust, the Gygax trademark and the like will be deleted. This is simply about the Gygax Memorial Fund. I am generally an extremely light moderator, but lets keep this focused.