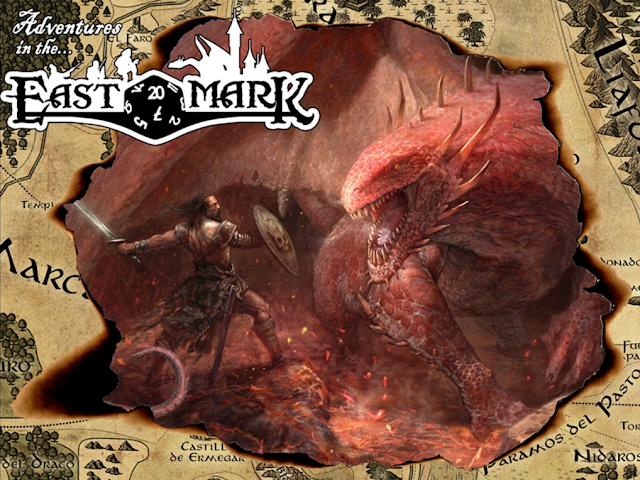 This is from the latest update of the Adventures in the East Mark - The Red Box Kickstarter Project.

I know many of you expressed dismay that it seemed Adventures in the East Mark was at a dead end in the US. Trust me, I shared your sadness if that were to remain the case. Fortunately, I can finally share with you positive news. Without further ado, here is an exciting update:

Thanks very much for supporting David’s Extra-Dimensional Publishing project to publish an English edition of Adventures in the East Mark. He published a wonderful edition of the game and I know you were always foremost in his thoughts as he fulfilled the project rewards.

I’ll soon be announcing that Nocturnal Media is the new licensed publisher for AEM products. I have the pleasure of taking over the AEM license, but also picking up where David has left off with exciting future projects like the Blue Box. David has graciously offered to forward this note to you via Kickstarter because we both feel you earliest supporters of AEM in English should be the first to receive this news. I’ll ask David to send another note to you when there’s something major to announce, such as a project for the Blue Box.

If you’d like to receive updates more directly, then please scroll to the bottom of www.nocturnal-media.com and “Subscribe For Updates”.

Briefly about myself, I founded White Wolf in 1986 and co-created games like Vampire: The Masquerade, but I hang my hat on my own Mage: The Ascension. I sold White Wolf about a decade ago and now have recently been active with my new company, Nocturnal Media. I’ve funded several projects on Kickstarter, including new editions of the Scarred Lands and most recently a new edition of a much-loved White Wolf product from 1990, Storypath Cards. Earlier this month, I announced that I’ve purchased West End Games, the publisher of such RPGs as Paranoia and the original Star Wars.

I know that some of you are still due beta-access to the Blue Box’s Campaign Setting Guide. David is providing me a list of the backers who pledged for this add-on and I have assured him that I will honor that reward. The Blue Box is about halfway through translation and could be completed as early as the end of May.

Adventures in the East Mark is a very appealing and exciting game, and I’m proud to make the entire series available in English. I hope you’ll continue to explore the world of AEM with me.

On a final note, I am thrilled that AEM has risen from the ashes of Extra-Dimensional Publishing and found a much more suitable home with Nocturnal Media. The game deserves being in much more capable hands than mine and I hope nothing but the best to Stewart, as well as the game's original publishers and creators. ¡Buena suerte, amigos!

Email ThisBlogThis!Share to TwitterShare to FacebookShare to Pinterest
Labels: adventures in the east mark, kickstarter