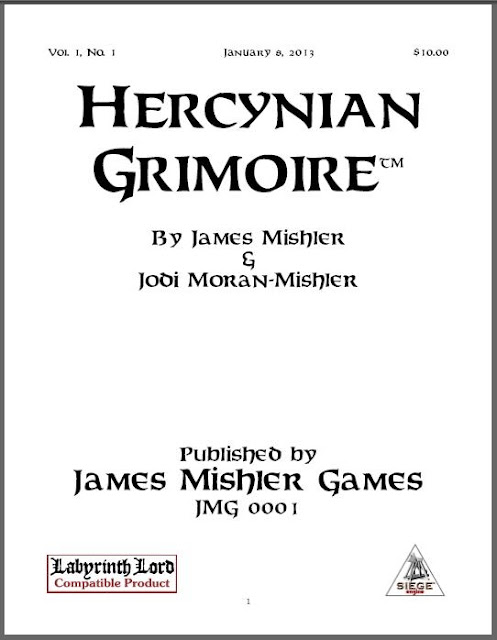 It seems that when James Mishler makes a return, he makes the return full throttle.

James' latest is the Hercynian Grimoire, written by James and his non-gaming wife Jodi. I'll let James explain what it is, then I'll let you know what I think of it.

The Hercynian Grimoire will be released on an irregular schedule, in that new issues of the publication may be released every week or every other week, depending on sales and our ability to write in a timely fashion. Each issue of Hercynian Grimoire will be released at an initial discount, with the discount to be rescinded when the next issue releases, though no sooner than one week after release. This is to give our core fans the benefit of the discount for their early adoption of each issue. We have no plans to compile issues of Hercynian Grimoire, or to offer issues on sale or discounted through bundles at a later time.

I say “our” ability to write because I am joined in this endeavor, as in all my future writing endeavors, by my lovely and talented wife, Jodi Moran-Mishler. She is not, sad to say, a gamer, but she has played from time to time, and her interest in myths, legends, monsters, and magic go back to her early childhood. She is not merely my writing partner, she is my muse. I am sometimes relieved that she is not a gamer, as her ability to conjure up creatures deadly and evil is diabolical. Her knowledge and creativity will come into good use in future developments.

Most materials to be included herein are framed in terms applicable to my new campaign setting, the Olden Lands, detailed in the forthcoming Chronicles of Mhoriedh line of products. The Olden Lands is a classic fantasy role-playing game campaign setting, incorporating elements of High and Low Fantasy, Swords & Sorcery, and Historical Adventure, and thus any materials herein presented should be readily adaptable to any fantasy campaign setting with minimal effort.

Regarding the name of this publication, in myth and legend the hercinia was a bird native to the vast, mysterious and mystical Hercynian Forest of the ancient world, of which the Black Forest of Germany is the largest remnant. The plumage of the hercinia was of such a bright and shining nature that travelers through the great forest did not need torches, as the light from the birds acted as their guide in the darkness. And so we hope this publication to be, a guide to Judges and players in negotiating the development of their games, a light in the wilderness of adventure. And so welcome to the first issue of Hercynian Grimoire!

If the above sounds like a lot - it is! This is a meaty diet of gaming goodness that James wants to feed us. No art to distract you, just gaming info, charts, tables, creatures - the list goes on.

James plans on releasing this weekly or every other week. I'm stunned. This is not a light fanzine - it's a well weighted gaming supplement. I would think that putting this out monthly would be nearly a full time endeavor. Hopefully James squirreled away some gaming material when he was away from publishing and has a bit of a backlog he can pick through.

Did I mention the random tables? Fun!

In any case, this reminds me quite a bit of James' old C&C stuff for the Wilderlands - well written, info heavy and inspiring - because I really want to work the Gnoll stuff into my current AD&D game. Of course, it's Rappan Athuk, so that might take just a little work.

(The Olden Lands Preview reminds me again of Jame's work on the Wilderlands. I'm looking forward to the full release of this one)