My Countertop of Games - Pictured and Then Disbursed ;) 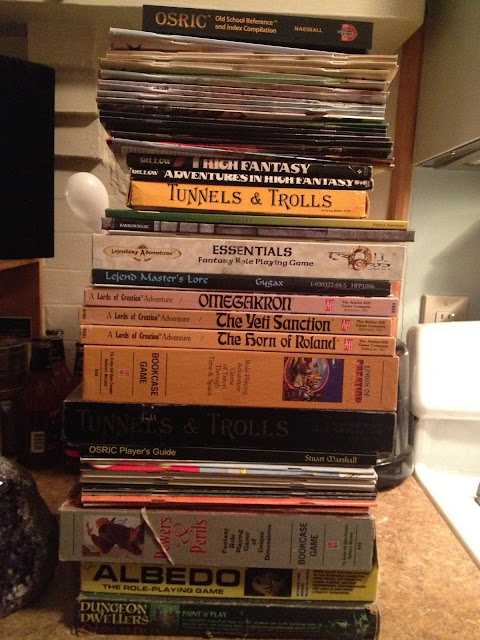 Remember how this month started? Hurricane Sandy and mandatory overtime for your humble barkeep? Well, I spent a small fraction of that overtime on gaming material - some to collect, some to read, some to use. Oh, and 25 issues of KotDT at a buck a pop. really, I couldnt go wrong :)

I had this spaced out and scattered, but decided to pile it up and see what it amounted to.

After the pic I just as quickly dispersed the pile into many smaller ones, less the wife catch on ;)

Albedo I grabbed in a thrift shop last weekend.

Power & Perils I snagged on Amazon as well as the Lejendary Adventure stuff.

Next is a bunch of Dungeoneers. Sone nice Old School bathroom reading material.

The OSRIC Players Guide, the small sized OSRIC and ASE2-3 were grabbed at 30% off on Lulu

Lords of Creation stuff was Ebay as was the T&T Orange Box. Same art as the Black Box. Great condition. A missing piece to my collection.

High Fantasy will go on a shelf, although the adventures may be converted for standard use.

Barrowmaze 1 was a splurge - but well worth it.

Up near the top are those KotDT issues. I stopped reading over two years ago, but at this price I'll catch up ;)