Cover art is in! We will get this off to the printer and keep everyone appraised of the estimate delivery date once we have it from the printers. We appreciate the understanding and support that you have shown. Happy Thanksgiving! 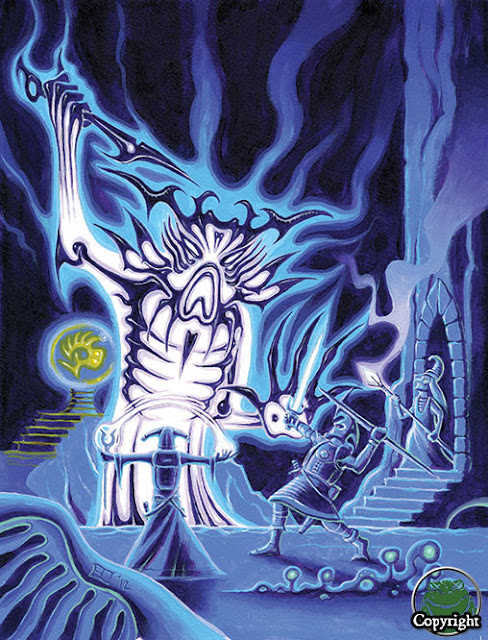 For backers only (Thanks to Tavis for permission to share)

In case you're just now checking in on the Player's Companion Kickstarter, or if you could just use a refresher on its status, here's the most important things to know:

Print rewards are are on track to reach backers in the second week of January. The book is at the printer now and we’re expecting to get the print proof for review shortly.
For the PDF rewards, a download code from DriveThruRPG will be emailed to you. We’re still finishing the internal hyperlinks for the final PDF, but you can download a nearly-final version that’s complete in every other way using the directions at the bottom of this update.
As a thank-you for your patience with the delay in fulfilling these rewards, we’re creating an expansion of the templates in the Player’s Companion, about which more below.
Weekly Update Schedule

Two weeks ago we promised to keep you informed about the Player’s Companion every week. We’re still committed to doing that, just on a different day. The last two updates went out on Fridays, which are also the day that those of you who are Dwimmermount backers get the weekly update on that project. To limit the number of updates crowding your inbox on the same day - and to give us a little more breathing room to prepare each one - future Player's Companion updates will be sent on Sundays. Apologies to anyone who has been waiting anxiously for this one since Friday!

Of all the opponents that ACKS players might encounter, a rival NPC party is one of the most interesting for players - and also the most time-consuming for Judges to prepare for. The templates in the Player's Companion do a great job of reducing the load of making a new character at first level, another potentially time-consuming aspect of play. We've been working to expand the template approach to make it easier to make characters at higher level, either for Judges to use as members of NPC parties or for players to enter a campaign beyond level 1.

So far, we're a third of the way through this project, with proficiencies chosen from level 1 to 14 for all of the classes in the core ACKS books organized alphabetically from Assassin to Explorer. Among the downloads for the Player's Companion, you'll find a Zip file in which these are presented two ways. The Word file Expanded Templates lists the proficiencies each template would gain at the level shown in parentheses, following the Player's Companion template. The Excel spreadsheet Expanded Template Characters 11-25 is potentially the more useful of the two. In addition to outputting the list found in the Word file, you can also use it to generate ACKS stats for each of these templates at any level you choose.

The spreadsheet is still a work in progress - it doesn't currently expand the spellbooks for higher-level arcane casters, or account for the effects of some proficiencies on the character's stats, and the statblock output is rough. However, it does calculate hit points, attack bonuses, and other key variables for the template characters. In weeks to come we'll continue adding to the classes covered and refining the way they're presented for use as NPCs.

Strangely enough, it doesnt say backers only, but as it consists of a link to backers material, I suspect "Backers Only" was the intention. If you are a backer, read the update and grab some of your loot ;)

Backers Only - Project and Identifiers Redacted

The Doc says I can work again. There are many monsters, but these ones are mine. Factions. Conversions. Busy times. Things might start making sense.

Hi everyone, I hope our American backers had a great Thanksgiving and all is well. Last week I promised to get you all a playtest as soon as I could and, originally, John and I were thinking that we'd put together a teaser document that was limited to just the basic system of magic, core rules, some examples and maybe some monsters and cool stuff to put on threat cards. When we actually when in to do some cutting we found that pretty much everything I've got in the draft is fairly essential to running the game so here's what I'd like to do:

Anyone who would like to get a game of Magicians going can message me (via the contact me button) and ask for the playtest. I'll link you to the beta draft of Magicians I sent John last week along with a couple videos and documents for those wanting to learn some Korean pronunciation. Keep in mind that this draft still needs a lot of stuff - more examples (I'm planning on using some characters and spells you guys came up with here) and just stuff like clarity, grammar won't be quite up to snuff, especially because I won't be able to get Daniel started on character sheets and the like until kickstarter funds are released, but I don't think there will be any problems reading it and understanding how to play, so if you want to start playing or are just curious shoot me an email!

I've created a forum, where you can discuss anything you want about learning a language, Korean, future hacks, feedback on the playtest or whatever else! If you'd like to contact me, there's the button through kickstarter but I can also be reached on twitter at @kylejsimons if you'd like instant clarification on the game, have a question about something, or just want to get to know me - I'm thinking of doing a Korean word a day on twitter for fun. If I don't reply right away I might be asleep since I'm on Seoul time but I promise I'll get back to you ASAP!

There is still a few days left for people to get pledges cleared if they were issues and, after that, I'll be messaging people and asking people for pictures so we can start sketching, letting our creators know how to come up with card packs, getting spells from anyone who pledged extra (or have it included in their pledge level) and all that fun stuff. I seriously can't wait, from the spells I've  seen so far there should be some pretty awesome stuff coming in from the rest of you!

Backers Only - (my summary) Proofs are in and they are good (with minor changes). Books should just before or shortly after the Christmas Holidays. Huzzah!