Thoughts - Dungeon World or What Apocalypse World Could Have Been 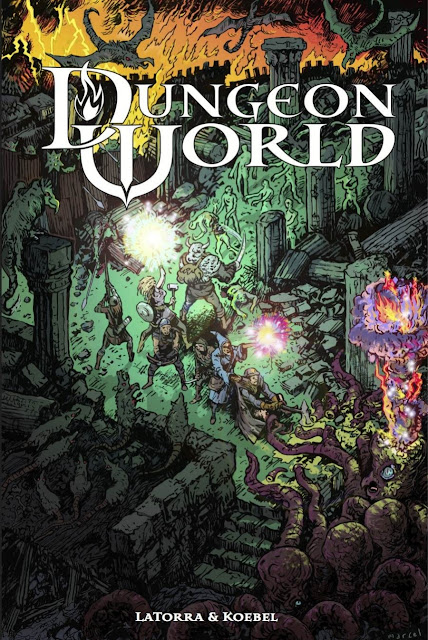 Most of you that have read my blog before already know of my opinion of Apocalypse World. One of the best rule sets of the modern era hidden behind purposefully obnoxiously confusing "Look at me! I'm Fucking Hip!" bullshit writing. AW is a gem of a ruleset hidden within a steaming pile of poo. I love the rules, I detest the rulebook. How much do I detest it? I literally threw it across the room in frustration and was extremely pissed off that I had wasted money on the shit. It's redeeming quality is that it plays so much better then it is written.

So, when I saw the Dungeon World Kickstarter over the summer, I was loath to spend money on it. My experience reading AW had soured me to any other variants. Shortly before it wrapped up, I put my 5 bucks down it full expectation of getting a similar pile of steaming shit. I figured I wouldn't regret 5 bucks, but I do. I wish I had put down 25 bucks so I could have gotten the soft cover. Yes, it is that good.

I had put off downloading the Kickstarter file (we're still waiting on the Kickstarter extras) as, truth be told, I was apprehensive of finding out what was on the other side. I had expectations and they weren't good, despite all the good ward I'd heard about Dungeon World. Remember, I'd heard the same about AW and how "beautifully it was written". Well, having finally downloaded the monster file (it's over 120 mb) I can finally say it kicked my expectations to the curb, and that is a good thing.

I'm actually groking the rules behind the system. Sure, they don't fully fit my OSR mindset, but for a good system, I can temporarily change my mindset ;)

I was reading it during lunch at work and I was actually drawn into the rules, which rarely happens to me. I'm enjoying the read through, although I have sidetracked slightly by reading A Beginner's Guide to Dungeon World (it's a free DL)

This isn't a review. The book is over 400 pages and I've barely scratched the surface. I'm drawn back to the rule book the moment I put it down, and I can't think of a more positive endorsement than that. Is it possible my opinion can change before the end? Sure, if Vince steps in and starts writing the same shit as he did in AW - thankfully it's only the AW rules they are building off of and not the writing style with Dungeon World ;)

Oh, did I mention the awesome cover?
Posted by Tenkar at 8:27 PM