The Future of Old School Quarterly - The Future is Now 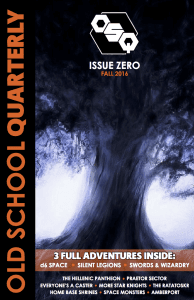 Regular readers of The Tavern shouldn't be surprised I've been closely following the progress of Old School Quarterly. It's a project that is close to my heart as I'm supposed to supply +Jason Paul McCartan with a series of Kickstarter related articles. Alas, my work schedule was preventing such from bearing fruit and Jason had a series of events on his side that slowed progress on OSQ but now the planets have aligned, signs and portents have been interpreted and the wind is blowing from the proper direction.

Fuck it, let me just quote Jason - and go to the Original Post at OldSchoolQuarterly to get the pretty post will all the snazzy links and pics.

Over the past year there’s been some illness and a bunch of other things going on, including InfiniBadger Press, the publisher of OSQ evolving into the next phase of its growth. We also dropped the ball on the original release plans for OSQ due to scheduling issues and a number of other things. Mea culpa.

The time wasn’t right for OSQ to really be developed and released.

The time is right now, though.

Well, for starters, there really is no other ongoing magazine publication catering to the old school gaming community any more, as Gygax Magazine ceased publishing back in January. This leaves an opportunity to step up and take its place and fill the gap. There’s a huge zine movement for other games, but there’s no real magazine-style publication that caters to multiple games at the same time available right now. There have been plenty of other publications that have also ceased publishing or reduced publishing over the past few years.

Secondly, our short term and long term business operations and objectives are now established and aligned. Most small businesses survive their first two years of business and about half make it to the five year mark, but a lot of that depends on the individual industry. InfiniBadger Press has been operational for about two years now and has been mildly successful. It’s now time to develop and grow the business, and a multi-year roadmap has been put together to develop a number of unique properties, including this magazine. The waters have been tested, and we know a little about what we want to create and what sells, and how to connect both.

Thirdly, the use of crowdfunding has been shown to be a great way to help support and grow small creators and companies and help them get their products created and released. After some analysis about how best to use this approach, the best way forward to help support the ongoing publication of a quarterly publication is through Patreon, and so, we’ve decided to launch a Patreon campaign to help support the magazine!

The magazine will still use advertising to help support it as well as post-release sales online (here at the OSQ website and many other online stores) and in retail, but the Patreon allows us to offer a more modern take on being a magazine subscriber:

YOU get to choose how long to be a “subscriber”: 1 issue, 2 issues, or more! Simply pledge during the periods you want

Get your digital edition from three different locations:
-the OSQ website
-OneBookShelf’s family of websites
-the InfiniBadger Press website

Of course, OSQ is still going to be doing things differently from the way traditional magazines do things. Most traditional magazines focus on print first, then digital, most often only printing in specific territories and costing a great deal to ship beyond that overseas. We’re focusing on digital first, then print using POD, allowing you to choose how to receive print copies of the magazine, if you even want to do that – using POD means being able to print near to where you live, and help keep costs down on international shipping. This approach can be called “just in time” printing, because you don’t print it until you want it or need it. By being a “subscriber” through the Patreon, you can even save yourself some money doing that!

Right now we’re updating a couple of the documents and pages including the Issue Zero page,  Submissions Guidelines and the Advertising Kit to include details of the Patreon and the new operations. We’re also setting up our online webstore, where you’ll be able to purchase digital versions of the magazine, as well as be directed out to other sites where you can buy that same issue, such as OneBookShelf, Lulu, and CreateSpace, allowing you to choose where YOU want to receive your digital or print issues from.

The plan is to release the OSQ Issue Zero in Fall 2016, which means an October 2016 release date. We’ll release an issue every quarter after that, with the support of the Patreon, advertisers, and sales of individual issues.

Of course, there are challenges ahead. A lot of business people say that’s magazines are dying because we’re looking at our phones, while a lot of other smart business people say that the publishing paradigm has changed and that we’re in a period of disruption. This means new business models and changes in the way things are done. It means trying out new ways to do things that are customer-centric and innovative. Even when focusing on old school games.

Oh, and consider becoming a patron at Patreon if you want the best deal possible on the upcoming Issue Zero release. You save money, you get extra content, and you don’t have to pay anything until the issue gets released!

Holy bejeezus but +Jason Paul McCartan has a lotta links in there. I'll make it simple for ya'.