One thing I'm guilty of is highlighting Kickstarters, good or bad, and then never returning them to the spotlight, which I think is a shame. Most of the good ones deserve a second look and some of the bad ones certainly have more sacrifices to make to the community on our behalf. The Monday Morning Kickstarter Update should be a weekly feature (although the title itself is subject to change).

Robert E. Howard's Conan Roleplaying Game - how many 112 page sourcebooks were funded by stretch goals? Fifteen!. If that doesn't get a "Holy Shit!" I don't know what does and it ain't over yet. They're still taking funding at their company website via Paypal and the next book in the stretch goals is none other that the Kull sourcebook. Oh, and you can grab the free Conan Quickstart here. 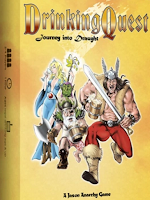 Classic Edition GM Screen - +Richard LeBlanc steps into the crazy world of Kickstarter and it's a beauty. Two screens, reference booklet, class master cards (don't leave home without it), spell record sheets, spell summary booklets and a character record log. Buy in is as low as $7 in PDF for the lot. Seriously, it's a steal. Me? I'm in for 2 sets in print. I'm building a fortress...

Drinking Quest: Journey into Draught - it fucking more Drinking Quest! Do you need to know more than that? Holy shit! I need to run a weekly session online or something. No, seriously. Not that the sessions would be all that serious, but I'm serious. 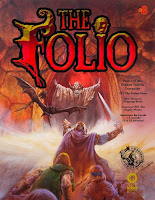 Godbound: A Game of Divine Heroes - +Kevin Crawford . Need I say more? Don't forget to read Kevin's update where he discussing the whole time sink involved in running and completing a Kickstarter. (His previous update is about the funds themselves) It's a good and necessary read for ANYONE looking to run a Kickstarter.

The Folio #8 The Hidden Valoria - I've posted about the previous releases in the Folio series but this one is special. It's actually has Dwarven Forge's stamp of approval and is set in Dwarven Forge's World of Mythras. Yes, THAT Dwarven Forge. If you are looking to get a chance to play in +Stefan Pokorny 's campaign world, here's your chance. The adventure and accompanying material are written for use with AD&D 1e and D&D 5e, so you're covered if you are a regular reader of The Tavern.