First things first - I don't do RPGNet. Too much drama. Too many bans. Big Purple ain't for me. Gareth doesn't want folks reposting Far West backer only updates, because somehow that is an attempt to get around his lifetime ban at the Palace of Ill Repute. I don't get that.

So, I'm not going to quote in whole, but only in part. It's the least pleasure I can get for my 150 bucks that I pissed away in a drunken stupor. That's my excuse and I'm sticking to it:


I've also gotten a couple questions about the art process -- including some criticism from some corners of the internet about "putting photoshop filters on photos" -- so I figured I'd take the time here to let you know how the art style for FAR WEST has always worked, whether it was me or Rick Hershey behind the pen.   We use source images (public domain film stills, photos of backers sent in by you guys, stock photos, my own sourced photos from trips to Dodge City, Durango Colorado, and more) to create an original digital collage, which is then used as the reference for a new illustration.   The works are then done by hand (in my case, using -- depending on whether I'm doing the work on my laptop or my desktop -- either a Wacom Bamboo or a Yiynova MSP19U pen tablet monitor).

Awesome - so Rich was just better at the whole "photoshop to a fake piece of art" type of deal. I'm glad it's only used as a "reference", because if it were taken lock, stock and barrel, that would be embarrassing. Kinda like saying you only used the real 20 dollar bill to make your counterfeit - it was only used for reference. 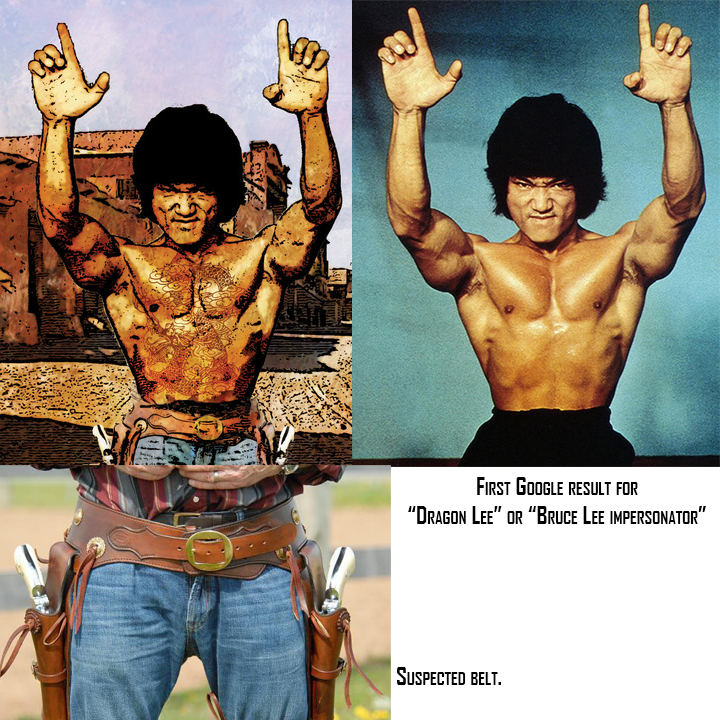 Major props to the Kicksnarker Community on G+. Y'all get a cookie ;)

edit: I'm guessing "Musa the Warrior" is still under copyright.