A DCC RPG Kickstarter - Peril on the Purple Planet 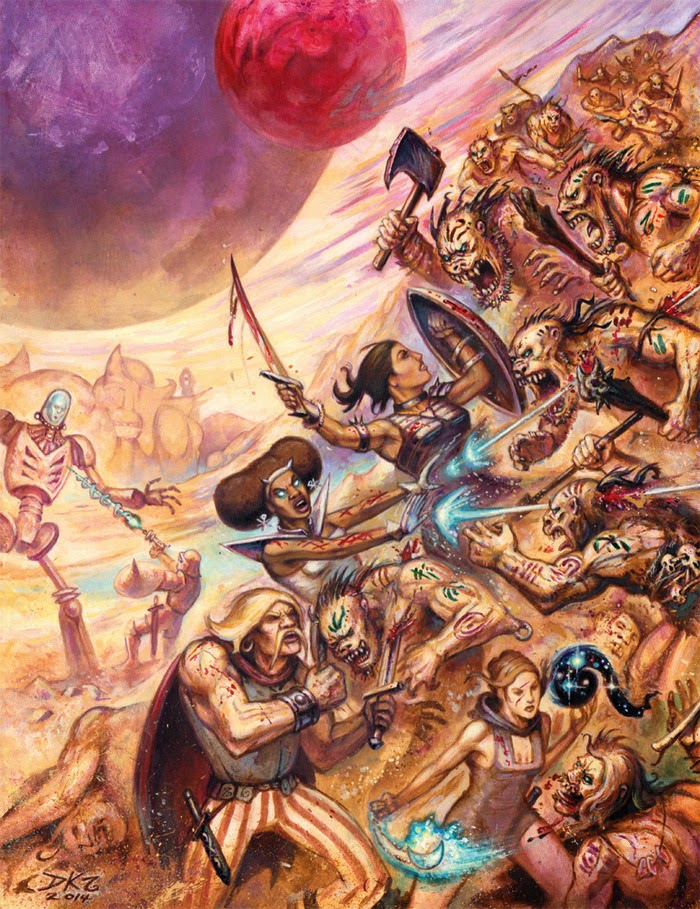 Goodman Games appears to have embraced Kickstarter as the way to push new products. Can't say I blame them, as it certainly seems to be working for them and others - for now. At some point, the Kickstarter well will start to dry up due to over-saturation and limited backer funds for what is essentially a preorder. And make no mistake, these are most certainly preorders.

Now, the previous DCC RPG Kickstarter, The Chained Coffin, didn't start out as a boxed set. It morphed into a boxed set when numerous stretch goals were hit. The $30 entry point for the module with the stretch goals became an amazing value. I doubt Goodman Games lost money on these boxed sets, but I suspect they didn't make much off them either.

This time, the retail adventure of Peril on the Purple Planet for a $20 pledge (no box, no stretch goals) while the boxed set with all of the stretch goals is being offered at $50. A bit of a bump from the previous Kickstarter, but this one potentially included an amazing looking Judge's Screen. It's also a price point where Goodman Games should still make a few bucks off the boxes sets ;) The Kickstarter launched this weekend and has already hit it's first stretch goal.

The writer this time around is +Harley Stroh , so I knew I'd be backing this the moment it was announced, price points and details mostly unknown. Need I mention the +Doug Kovacs art? Simply amazing.

At this point I expect I'll be hacking this for Swords & Wizardry.

A Dungeon Crawl Classics adventure module of planetary scope – at level 4. The adventure flings your characters to adventures on a distant world dying slowly under a weirdling sun.

The first softcover book is the adventure module Peril on the Purple Planet, which has two built-in special features. First, the cover art is oversized, and spreads across front and back cover in addition to wrapping around to front and back flaps. The flaps also double as player handouts when folded out to face the table. Second, the adventure map is a three-page-wide hex crawl, which folds out of the module center as a three-panel gatefold. Additionally, the adventure includes a number of B/W interior handouts to show the players what they face on the Purple Planet.

You can support this Kickstarter by adding on other adventure modules from the Dungeon Crawl Classics line, most of which are on sale for 25% off as part of this Kickstarter. You can also add on Purple Planet Player Guides at $5 each.

Stretch goals for this project will put even more items into the boxed set! These include the possibility of an ecology book, additional encounters, a book of handouts, a book of magic, a custom GM screen, and a guide to the Purple Underplanet!

We expect PDF copy of the module to be available shortly before Gen Con, and print copy to be available at Gen Con or shipped soon after (depending on backer preference). If we have extra copies remaining at Gen Con after all Kickstarter pickups, they will be offered to the general public.
Posted by Tenkar at 9:39 AM