Did the OSR Convince Mearls to Refer to D&D 5e as "Rules Cyclopedia" and "AD&D"? 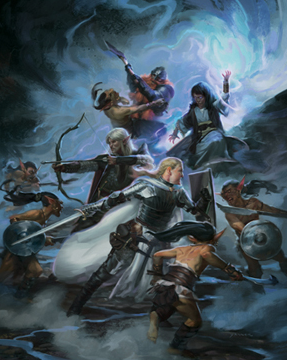 Possibly. The OSR does have punch for it's size. I don't think any one voice did the convincing tho'. In truth, I think the economics of the new edition won out.

First, it's always easier to add than it is to subtract, so building your free core rules along a "basic" set of guiding principles makes sense. It also fits into recent trends at WotC - market the RPG as if it were a MMORPG.

"Free to Play!" is what you see with most of the new (and older) MMORPGs today. You can play the free game forever, but sooner or later, you'll either want to buy more content, or subscribe to get subscriber's content.

So, give away a free "Basic D&D" in PDF - limited options but a full game from 1 to 20. Offer additional content (expanded rules, adventures, settings and the like) and offer subscription benefits (I'm going to guess this is where the SRD will be).

Will the new rules play like either of the above? As much as any OSR game variant I suspect, but it's an emotional statement Mike is making - "We heard, and we hear, and we want you back!"

Why the OSR? Because we create, we play, but most of all - we are the demographic with the cash to dispose of on the hobby we love. Why not aim the new edition at the older players? You've already lost the recent ones to Pathfinder, and I doubt many 4e fans are going to find much love in the 5e world of gaming. Want to bring in new players? Free rules may just do that.

Why release the "Basic Rules" for free? To bring in the nay-sayers and allow them to read or even try the rules without spending cash up front.

The OSR shows that there is a market for the adventures themselves - the rules are now and always have been a secondary thought in the OSR. Just about every group runs with their own mongrelized set of hashed together rules. Most often the rules themselves are free.

WotC is now joining the free market, and they are bringing visions of the glory days of TSR. The vision may not come to pass, but I give them points for trying.


"Basic D&D is a PDF that covers the core of the game. It’s the equivalent of the old D&D Rules Cyclopedia, though it doesn’t have quite the same scope (for example, it won’t go into detail on a setting). It runs from levels 1 to 20 and covers the cleric, fighter, rogue, and wizard, presenting what we view as the essential subclass for each. It also provides the dwarf, elf, halfling, and human as race options.

But the best part? Basic D&D is a free PDF. Anyone can download it from our website. We want to put D&D in as many hands as possible, and a free, digital file is the best way to do that.

If Basic D&D is the equivalent of the classic Rules Cyclopedia, then the three core rulebooks are analogous to Advanced Dungeons & Dragons. Want more character options? Pick up a Player’s Handbook. Looking for more critters for your campaign? The Monster Manual has you covered. Want to sculpt a unique campaign? Pick up the Dungeon Master’s Guide. Still, Basic D&D is the true heart of the game and could easily provide a lifetime of gaming."