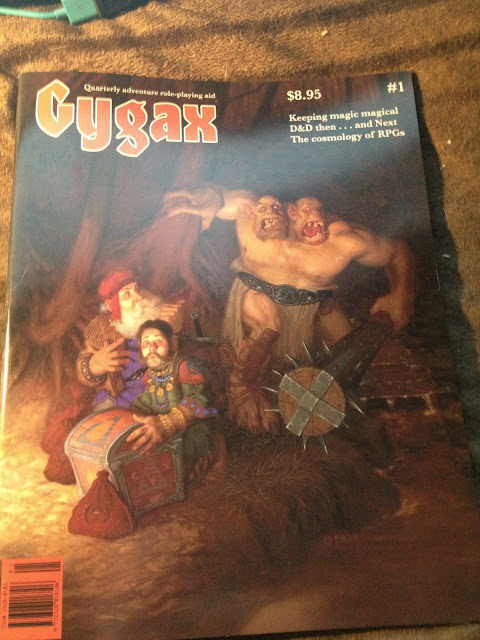 Back to reviewing Gygax Magazine #1 (the first part of the review can be found here):

DMing for your Toddler by Cory Doctorow - Cory's article is a nice piece on improvisational DM'ing with a very simple improvised RPG system. My niece is two at the moment. I think I might try on her in two years.

Great Power for ICONS by Steve Kenson - It's a sampling of power for the forthcoming Great Power supplement of ICONS. It's times like this I wish I actually player Supers type games. It appears to be well written.

The Future of Tabletop Gaming by Ethan Gildorf - A decent article putting D&D into the perspective of the time and culture it was released into and how it fits into today. Yep, there are times where I long for simpler times too.

The Gygax Family Storyteller by Ernest Gary Gygax Jr. - not so much a "old school cred" article as a Gygax family story, centered on EGG himself. Very enjoyable. See, I like historical pieces, just not the "here's why I'm almost famous" stuff.

Talents Off the Front Line by Dennis Detwiller - it's an article for the Godlike WWII era supers game. It makes me realize that I need to do more than skim the rules (as I do own them). I may need to actually read them thoroughly and run it.

D&D Past, Now and Next by Michael Tresca - a look at D&D throughout the editions by zeroing in on things like miniatures, magic items, power levels, random attributes, lethality and such. It looks at the handwaving and other adjustments needed to bring past modules into later or "Next" editions. Much better than I expected.

Gnatdamp: A Sanctuary in the Swamp - Michael Curtis - Not so much an adventure as a small village (about 200 inhabitants) with a handful of adventure seeds. Well, four seeds spelled out at the end with a paragraph each and probably a half dozen or so an enterprising DM could whip up from the locations and inhabitants. Systemless. Nicely done.

Magical Miscellany by Randall Hurlburt - Some magic items for the AGE (Dragon's Age) System. I own this and almost ran a session of the system. Distracting me from my OSR gaming! Still, most of the items here could be converted to OSR gaming with little trouble.

An AGE of great Inventions by Rodrigo Garcia Carmona - Adds guns and gadget research to AGE. I'm sure there is a way to convert or use this for inspiration for some over reaching gnome ;)

Scaling Combat Feats for Pathfinder by Marc Radle - I wouldn't be surprised if this article was pretty cool for Pathfinder Players, but feats are all Greek to me.

Marvin the Mage by Jim Wampler - 2 page comic spread. OK comic, but I may borrow the potion hawking scene for my game on night :)

What's New With Phil & Dixie by Phil Foglio - a 1 page comic bringing back the Dragon Magazine classic. Some of the jokes actually made me smile, which isn't bad for a comic that hasn't appeared in ages.

The Order of the Stick by Rich Burlew - a 1 page comic of OotS. I love me some OotS. This page will not convert you if you aren't currently a fan, but I'm hopeful it picks up with later issues.

So, my overall score of Gygax Magazine #1? Good, not great. I don't mind some historical pieces, but I did get annoyed by the "here's why I'm great" articles that I covered in the first part of the review. The second half of the magazine is definitely the stronger part.

If I had to pick out the strongest piece, I'd go with Gnatdamp. It's a fine setting piece.