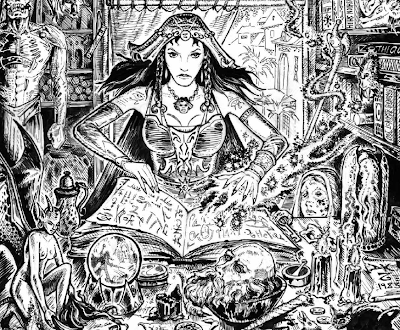 Yes, I know - just a wee bit late, but that's okay, as we have some excellent prizes lined up for the winners of this month's contest.

We also have real judges this time around:

Tim Shorts, he of the Gothridge Manor and The Manor Fanzine

Quinn Conklin, he of Toys For the Sandbox Fame

Mike Garcia, founder and publisher over at Occult Moon

What is this month's contest? New Mercurial Magic Effects.

What is a Mercurial Magic Effect? Here's some examples from the DCC RPG Rulebook:


At great cost. Every time the wizard casts the spell, someone he knows dies (judge’s choice).

Karmic casting. Before making the spell check, the wizard can choose to add or subtract 1d5 from the roll. If the caster adds 1d5, the next time he casts the spell he must subtract 1d5, and vice versa. After two castings, the karma is reset, and the wizard again gets to choose what modifier to use, if any.

Breath of life. Casting this spell imbues the caster and those around him with beneficial energies. All within 15’ of the caster (both friend and foe) are healed 1d6 points of damage for every level of the spell (i.e., a level 3 spell heals 3d6 damage).


Mercurial Magic is a spell's signature, and will attach to the spell when the PC learns it. Some effects are negative, some relatively neutral-ish and some are beneficial.

So, right one up of your own design and add it as a comment on this post. Contest will end at 7PM EST on October 2, 2012

What are the prizes, you ask?

Crawl! Fanzine, in print and sent to your abode.

The Manor Fanzine, in print and also sent to your abode.

DCC #67 - Sailors on the Starless Sea, in print and guess what? Also sent to your abode.

The Forgotten Fortress - in PDF, with redemption code sent to your email.