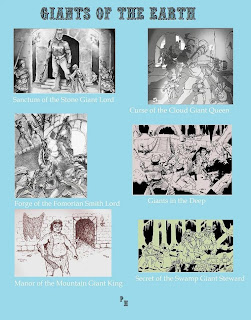 Giants of the Earth (Giants IN the Earth on the RPGNow site - probably a typo) is 7 (not just the 6 depicted on the cover page) Giant themed adventures for AD&D 1e / OSRIC that are written to kick off after the classic G series of adventures - which is why the numbering of the included adventures starts at "4" and not "1".

What can I say about them? They are all worthy successors of EGG classic Against the Giants series. RC Pinnell has really put together a nice series of adventures, which I believe were previously released as limited editions in print form.

The adventures themselves are well written but lethal. Not lethal in the James Raggi "Look! Your dead!" sort of way, but more like the "You're fighting giants. If you don't find a way to keep the odds in your favor, you will pay a big price!" type of lethal.

The maps are very well done, and I'm half tempted to reuse them for lower level dungeons, as I sincerely doubt I'll be getting my party up to ginat killing level any time soon. Pregens are included, which makes any of these adventures a fine convention module, but I do find some of RC's party formation comments amusing - apparently he does not much like Unearthed Arcana, which is a shame, as it's the next AD&D 1e reprint to in the hopper. Some examples from the various enclosed adventures:


The DM should not include classes found in the UA manual unless he personally sanctions their inclusion in the game system.

The
addition of a druid or bard may be of great assistance,


but a thief or monk is not recommended, nor are


assassins and/or UA classes or combos.

Unearthed
Arcana characters/races should only be included if


you are satisfied that such do not overpower the other


characters, nor the encounter.

Sorry, I just found it amusing that notes like these were in the beginning of 3 of the 7 adventures. That might be my only issue with these adventures, is that they are written with the assumption that certain classes and / or races will be present or shouldn't be present.

A thief will not find anything of interest in this encounter, nor will a monk; a druid and bard (no higher than bard 1) would be more helpful to the group than the thief and/or monk.

Adventuring parties aren't generally created to conform to a future adventure's class requirements. In truth, it's not that these instructions are necessarily true - there is more to being a thief or a monk than thieving skills (and I'm still amazed that we used these classes as combat monkeys back in the day in my groups - but it just shows you can).

Again, these are minor issues. For $6.50 you get 7 giant themed adventures that will challenge any party that is hovering around their AD&D name levels. Are they a homage to the classic G1-3? Certainly, and they do it well. Now, if you ran G1-3, then G4-9 plus the added adventure your party may never want to hear about any giants thereafter, but that's a decent risk to take ;)

This product contains 6 separate adventures pitting characters of levels 6 to 14 against various giant clans. Each can stand alone as a single adventure, while some have connecting story arcs (parts 5-6, and 7-8 specifically). Designed for 1st edition games and experienced players, it can easily be adapted to most RPG rules systems)