Kickstarters That Make me Scratch My Head: Act Ten RPG 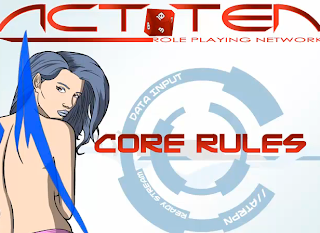 I just have no idea what the actual game is about. I know it uses D10's for skill resolution.

The act is certainly sexy, but is this a spy game or supers or sci-fi - I have no idea. I tried watching the video and listening to the playtesters, but as what they were talking about initially made me scratch my head - and then fast forward - complete with more head scratching (as a side note, did we really need them literally blowing smoke as a distraction during the interview?) I'm confused as to the theme of this game.

But hey, its a sexy picture we have shown as the screenshot for the video. So, is this the theme of the game? sexiness?

Again, I'm not sure but it does seem to get repeated:

Let's see what the Kickstarter page has to say about the game:

Designed from the ground up to be accessible, easy to learn and fun to use. Act Ten uses 1d10 for everything in the game, keeping rolls quick. I’m not going to pretend this is the first system of its kind, but here are some of the features I think you will see separates the Act Ten system:

Custom Character Builds. Create your characters just how you want them. Act Ten relies on skill choices instead of classes to dictate what your character is. With our experience system, your character can evolve in any direction you want to take them.

Traits. Create characters with addictions, acute senses and even give them insanity or a rich family. There are a hundreds of combinations to help create back story, character depth, in game complications or advantages.

Precision Tuning. You have more options than ever to customize your characters specializations. Modify your target numbers, add a bonus to your roll, beef up your overflow and reduce the time it takes to do something.

On The Fly Experience. You get XP every time you do something, which allows your character to learn new skills on the fly. This means the proactive player will be rewarded, and you will advance naturally, as you play.

Star Power. Earn points whenever you steal the scene. Then use those points later, to add to rolls, reroll botches, lend to friends, use as experience and even force the Game Master to re-roll.

Simplified Gear. Weapons, armor and equipment are simple and to the point. They help you get things done. Period.

Dice Mechanics. With multiple task resolution options, 1d10 is all you will ever need to cover the angles in this game.

Maneuvers. Choose an attack style to fit your characters needs. Defensive and offensive moves aren’t a matter of just blocking and attacking anymore, but how you do them.

Overflow Triggers. One roll can evolve into many outcomes. What starts as a simple sidestep can become a parry, or even a counter attack! Damage becomes greater the higher you roll, so It's not about passing or failing, but how much you do it by.

Diverse Combinations. Multiple stat and skill combinations help you play an adaptive and expansive character. In depth sub stats help further define your character based on your choices.

Which is all fine and dandy - but what is the game about? I still don't know.

Maybe it's about being a scientist:

Or not. I suspect it's big breasted women reading their iPads. Not a bad thing necessarily, just not a game I want to play with a bunch of guys in a G+ Hangout. Or maybe it isn't about that, and we would want to play it. No idea from the Kickstarter page.
Posted by Tenkar at 8:03 PM