Review - The Monolith From Beyond Space and Time - Part 1 - Into the Valley of WTF!?! (LotFP) 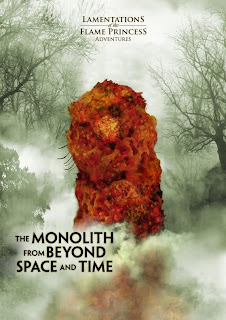 I've been struggling with writing the review for Monolith From Beyond Space and Time for a few days now, for the simple reason as I didn't know where to start. Well, that and I wasn't sure if it was going to make any sense. Especially if I were to avoid "spoilers".  To deal with the "making sense" issue, I've decided to break this review into multiple parts. As for where to start, I guess I'll just start at the beginning. As for "spoilers", I'll indicate when we hit that point - and it will run from there to the end of the post.

Now, starting at the beginning might make sense for most reviews, and maybe it even makes sense here, but I'm not sure. The first thing you, as the future GM of this adventure needs to do is read the Author's Notes. This is shit I usually pass right over, but read them. There is a huge SPOILER ALERT! HP Lovecraft vibe to the Monolith and it's environs, even if nothing is specifically borrowed from his mythos. You do need to understand this before moving on to the rest of the adventure, or else the confusing aspects won't make sense (as they conform to their own sort of reality).

The Valley: Into the Valley of WTF!?!

I really don't know how to describe the Valley. Literally. It's size and effects on the party are random (anywhere from 1' across to 1000 Astronomical Units). Truth to tell, on my first reading I thought all 10 possible effects were actually 10 effects that were always in effect in the Valley, which nearly made my poor GM head explode. I'd like to not have my head explode, and rereading correcting my bad assumption. Still, the Valley is extremely dangerous (Magical Sentience brings your cast spells literally to life that can cast itself at will - just one example)

So yes, your environment can potentially kill you before you even get to the Monument, and that is without using any of the possible random encounters / locations. Now, there are 7 encounters / locations detailed in the adventure. The GM is encourage to add his own. Or maybe just use a D7. Some are a few paragraphs long. Some are 2 pages long.  All serve to add to the general weirdness of the Valley (which is a direct result of the Monolith itself). Some may have long term repercussions on the PCs. As is usual with James' stuff, know how far you want to take it on your players. Or, better yet, make this a campaign ending adventure, because then you may feel less guilt when the characters are forever fucked ;)

Did I mention that the art is excellent? Yep, some pretty sweet stuff in here (and no where near as disturbing as Death Love Doom)