My Afternoon With Guild Wars 2 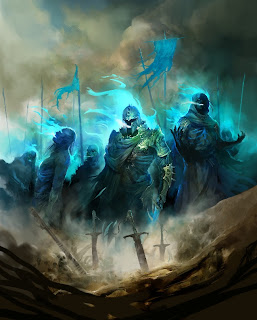 Well, not the whole afternoon - I spent a good 2 hr chunk with one of those naps from hell, where you get to tell the dead that they shouldn't be in your dream, because, well - their dead. Thank God the fact that the living room renovations were done were the clue that let me know I was dreaming, because everything else was real as rain.

Where was I? Oh yeah, Guild Wars 2. Pretty damn sweet if you ask me. No monthly fee right from the start? Win win. PvP where everyone get's leveled up to 80, so the level gap is less pronounced (I assumed you still get skills and other bennies earned, so your true level will probably help, but it's not the swing like in other games of it's type).

Started with a human necromancer. Hit level 4, then took the nap.

Came back and played a norse ranger. Hit level 8 with him. No dwarves in the game, so if you see Tenkar Calishun running around on Tarnished Coast, that would be me ;)

I like the personalized quest chain - it reminds me a bit of the latest Star Wars MMO - it's about the one thing SW really got right. I like the on going events, much like Rifts. I like the PvP, although I would like to see some Warhammer Online type PvP, with limited time and set goals. Maybe that stuff is there and I haven't seen it yet.

No clerics. Kinda strange to play a Fantasy MMORPG without a declared healing class (a role I often took upon myself). I really need to give this some more time to find out how all the classes play out. I do like the engineer class, as it reminds me a lot of the same class from Warhammer.

Ah well, back to reading my PDF of Blood & Treasure. If you decide to grab it from Lulu, the code for August is AUGBOOKS12 for $20 off. If you get it in Hardcover and email Matt your Lulu receipt, he'll hook you up with the PDF for free.
Posted by Tenkar at 9:36 PM