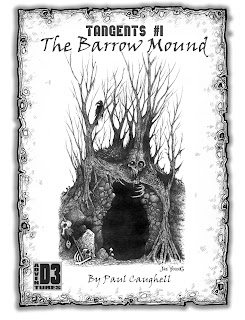 I've noticed a recent spike in "generic" adventures and such recently. Maybe its the success (and frequent releases) of the Toys For the Sandbox series, but there is certainly a market for such. For one thing, you don't have to worry about abiding to the OGL or another license. For another, you aren't pinning yourself to a specific ruleset. LL, S&W, ACKS, RQ, Legend, the list goes on. Possibly just as important, you aren't locking yourself into a specific level or power range. Generic might just as well mean "flexible" in these cases.

The Barrow Mound is certainly "generic fantasy". It is systemless. It can work in just about any fantasy type system, and I think would make a sweet little DCC RPG adventure with some work. This is the point where we talk about The Barrow Mound's strength and weakness if you will. It isn't read and drop into play. It has a deep backstory. Deep enough that it should be reflected in the region's history. Which means this is more of a read, revise, tweak and plant sort of adventure. Actually, some of the encounters require fleshing out to tweak to the party you have, so there is prep needed before running this adventure in any case.

The strength of this is that your players will appreciate the depth of the story. Heck, the adventure even ends with a number stories seeds that can build of this one. There is a lot packed into 8 pages of adventure. I just don't see it as drop an play like the adventure states. It's good though. There's almost enough ideas here to flesh out the history of a corner of a sandbox, and isn't that what it's all about, great ideas? The Barrow Mound succeeds in providing the GM with some great ideas.


Under a black, cloud-choked sky, something stirs near the hamlet of Elrin. Rumors of an unnatural blight, creatures of darkness and evil threatening the countryside abound. Brave souls are needed to dare the twisted forest, to find the heart of wickedness plaguing Elrin and defeat it forever...or be consumed by it.