August DCC RPG Contest - Get Some Corruption and Maybe Win a Prize! 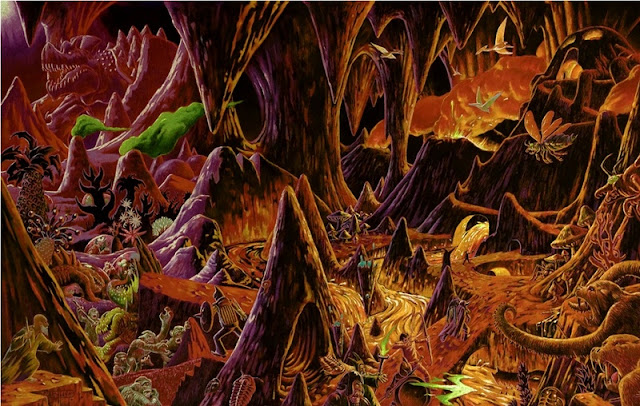 I'm going with ScrivenerB's suggestion - new Corruption results, with the idea of getting enough entries for a few alternate tables. (ScrivenerB - email me at erikATtrubluniteDOTnet so I can get your gifts to you).

So, here's what you gotta do:

Post a Corruption result of your own design for the DCC RPG in the comments below. It could be Minor, Major or unlabeled if you are not sure. Use pages 116 and 118 in the DCC RPG rulebook to find other examples (the following example is from the DCC RPG Rulebook:

(5) ears shrivel and fold back.

Prizes - Dak will be sending out a copy of Crawl! #3 to the entry that I think is best.

Purple Sorcerer is donating a PDF copy of each of it's released adventures to the prize pool - Perils of the Sunken City, Ooze Pits of Jonas Gralk and the soon to be released Mist Men.

Other prizes - I'm working on some PDF copies of DCC adventures from some of the 3rd party publishers. Expect this to get updated shortly. These prizes will be distributed randomly amongst the entrants.

I'll be purchasing  copies of Toys For the Sandbox for 5 entrants of my choice. They will each have their choice of an issue from 1-16 in the series.

Contest ends at midnite, August 31st, EDT. Enter as often as you like, but you can only win one prize no matter how many entries.

(by adding your comment to this thread, you agree that your entry may be compiled into a list with other entries, that it may appear in on this blog, Crawl! or the DCC Crawler's Companion. The lists compiled will be given to the DCC community to use. And corrupt...)