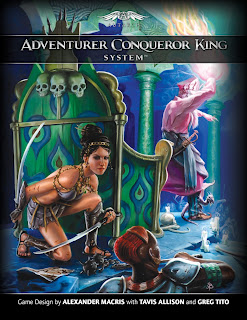 I believe we have played at least 12 session of ACKS - we started in early May of 2012 and have taken off one week a month (sometimes two). So, by my reckoning, we are at 12 or 13 sessions. So, what can I tell you about ACKS?

First, let me "pick the nits" and get them out of the way:

Using the Player's Companion will lead to some unbalanced classes. It's the nature of the beast - the book is in beta. Still, be prepared to fix things on the fly if needed.

Proficiencies are great in theory - most are piss poor in execution. The chance to succeed in most of them is nearly pathetic, which is why I added stat bonuses to proficiencies.

The needless rewording of to-hit, THAC0, whatever to Attack Throws makes the conversion to other OSR games needlessly confusing. It isn't hard, but it is awkward.

Character classes. Many of the character classes beyond the core classes (and in the Player's Companion) default to a campaign setting that isn't available yet. Some of the classes seem to be very campaign specific, so working the into your game may or may not work.

Okay, the nits are out of the way - now to the good stuff:

Spells repertoire for the Arcane Casters makes them sorcerers of a sort, but it seems to be done right. Not saying I didn't throw my own house rules into the mix, but I like the way it is handled, as it gives arcane casters some flexibility.

Proficiencies - once I house ruled them, they became important parts of the game for my group. I do like them.

Levels cap of 14, 10-12 for specialty classes. It keeps the games power levels within the realms of playability.

Long term playabilty - the most easily ported and ground breaking part of ACKS is the framework used at higher levels to accomodate PCs that become rulers or otherwise influential players in the larger world. It is well done and pretty much defines the game. We are no where near that level of play.

So, the question then becomes: Would I run a second campaign of ACKS before running a new campaign. For that, the answer truthfully is "I don't know". I really like S&W Complete and I'm enjoying my short gaming arcs of DCC RPG. If the ACKS game were to come to an end, I suspect I might run with a different OSR style system, not because ACKS doesn't do all I want it to do, but because there is so much out there that I want to play with.
Posted by Tenkar at 4:00 PM