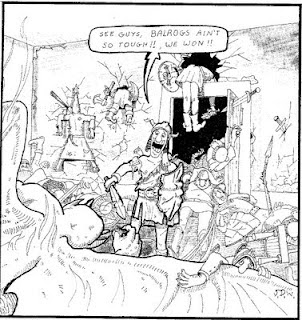 By now, I'm sure most you have heard Monte Cook has left Wizards of the Coast.  I'm going to do what I do, if not necessarily best, at least effectively and vaguely entertaining:  I'm going to look at Monte's post where he makes the announcement.

Change of Plans
Last week I decided that I would leave my contract position with Wizards of the Coast (so, this implies that his position was time limited, and it appears he is bowing out before the contract is up). I am no longer working on Dungeons & Dragons (bringing Monte in was the big news, almost bigger than the D&D Next announcement itself.  bringing in Monte also implied a return to 3e, at least as a base to build 5e upon), although I may provide occasional consultation in the future (unless it's to clear up a rule issue based upon his work on D&D Next, I really don't see this happening). My decision is one based on differences of opinion with the company (Which appears to mean his boss, Mike Mearls). However, I want to take this time to stress that my differences were not with my fellow designers, Rob Schwalb and Bruce Cordell (see?  no mention of Mike). I enjoyed every moment of working with them over the past year. I have faith that they'll create a fun game (this is not a ringing endorsement.  A true endorsement would have been "Great Game" or a lesser "Good Game"). I'm rooting for them.

Due to my non-disclosure agreement, as well as a desire to keep things on a professional level (wow!  this speaks pages without just a few words.  I would guess the difference in opinion got heated recently), I have no intention of going into further detail at this time. (Mostly, I just hate drama, and would rather talk about more interesting things.)

As for what I'll be turning to next, I hope you'll stay tuned. I plan on having an interesting announcement in that regard in the near future (Monte has done some interesting stuff as a self publisher in the past.  imagine what he could raise using Kickstarter.  My money is on a release via Kickstarter).

What else can we surmise from this announcement?

It isn't easy to make One Game, All Editions.  It's even harder when people working on it have different opinions about the approach to take.  I don't think Mike and Monte were always on the same page.  I came to this conclusion when Mike removed Monte from the weekly Legends & Lore column.

If Monte had a fault with his weekly posts, it's that he started out using "marketing speak" and virtual soundbites to push D&D 5e as a system that would allow for all edition play in one set of rules.  A laudable goal, but a crock of smelly shit if you ask me.  I suspect that Monte, who is nothing if not professional from what I know of him and his work, came to a realization that a good game and the desires of the "powers that be" at WotC did not intersect.  Being associated with a steaming pile of poo when you've had an impressive career as a game designer isn't the feather in your cap that one desires.

Sure, this is 100% conjecture on my part.  But not really, as there is a lot to read between the lines in Monte's post, and the timing of his departure.  This does not bode well for D&D 5e, but than again, I haven't seen much recently that has.
Posted by Tenkar at 7:53 PM