Games From the Basement - ElfQuest 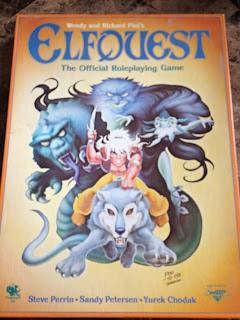 There was a time, back when independent comics books were first making waves, when certain comics took off.  ElfQuest was one of those comics.  It didn't read like a comic, at least not like the comics I knew about back then.  It read more like a novel with pictures.  A poor novel in my opinion, but I've never been a huge fan of elves in general, and the elves presented by the Wendy and Richard Pinni annoyed the crap outta me back in those days.  Maybe I've softened over the years.  I'm not so sure.

Somehow I picked up the ElfQuest RPG.  Alright, maybe not somehow, because I actually liked the BRP system back in the day.  Stormbringer, CoC, the boxed set that had pieces of games in it (I need to see if I can find the box, but it had supers, and modern, and some other stuff).  ElfQuest was from Chaosium, they did good stuff, so I bought the game. 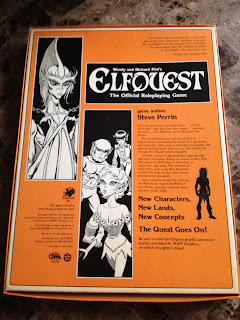 I probably would have appreciated it more if I cared about the inherit story line, but I didn't.  Maybe we would have played it if anyone else in the gaming group had even heard of ElfQuest, but they hadn't.  I can actually remember read the rules in the living room one winter night as snow was falling outside.  Actually, it's the only true memory I have of this game.

If nothing else, the wife should be happy as I'm clearing out more games to get boxed and moved to storage.

Interesting, you can read all of the comics online at the WARP website.  I'll have to check later to see if my tastes have changed any.
Posted by Tenkar at 10:13 PM

Email ThisBlogThis!Share to TwitterShare to FacebookShare to Pinterest
Labels: elfquest, games from the basement