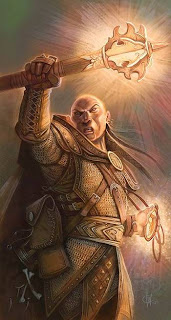 A few weeks ago, I shared with you a high-level overview of the design goals for the next iteration of the D&D rules. Starting this week, I'd like to show you some of the targets we've set for different elements of the game. This week we'll take a look at the cleric. (the cleric has been a popular target on the WotC site recently)           (original article can be found here)

The cleric was one of the three original D&D character classes. Oddly enough, although healers are common in most fantasy RPGs, many games cast such characters as unarmored spell casters (oddly enough, as D&D was the first RPG.  If any game should be consider precedent setting, D&D would be it).  D&D is fairly unique in that its divine caster wears armor and totes a weapon (is it really that unique tho?  or maybe every MMORPG of a fantasy bent has created healers and clerics just like D&D out of coincidence?)

When looking at the character classes in general, we've taken a few basic points as a starting foundation:
I doubt that those three points will be outlandish or strange to anyone. They're listed in order of importance, though it's rare that these three points come into direct conflict with each other (I can see them coming into conflict fairly often depending on how close one stays to the above definitions). Then, with these three general points in mind, we can then take a look at how the design goals for the cleric class primarily concern its role as a healer and support character, mixed with a dash of the elements that make it unique to D&D.

1. The Cleric Is a Healer

This one should seem obvious, but it's worth making it clear that we assume that clerics can heal and that their abilities should reflect that. A player new to D&D who creates a cleric could focus on keeping the rest of the characters on their feet, and the mechanics would make that easy to understand and do. (I'm guessing many of the "new crop" they are expecting to gain will have some experience with MMORPGs and grasp the concept of a "healer")

2. The Cleric Is a Divine Spellcaster

The cleric is our divine spellcaster, the iconic wielder of the gods' power. There might be other types of divine magic-users in the world of D&D, but the cleric is the most common such spellcaster among adventurers. The cleric's spells form the most prominent portion of his or her capabilities. (i'm assuming healing spells fall into this category too, or are we retaining "healing surges" from 4e?)

3. Divine Magic Is Subtle and Indirect

Divine spells are rarely naked displays of power meant to smite and blast the cleric's enemies. Instead, the cleric's magic lends strength, support, and durability to both the cleric and his or her allies. Spells such as bless, cure light wounds, and neutralize poison are iconic divine spells (as are command, hold person and flame strike). They lend aid to the cleric's allies and help reverse the efforts of the cleric's enemies. A cleric might help overcome an ogre berserker by healing the party's fighter, allowing the fighter to survive long enough to deal a deadly attack.

4. The Cleric Is an Armored Warrior

The cleric is a warrior, though not as skilled as a fighter and typically armed with weapons linked to his or her deity. Clerics fight to defeat their gods' enemies, to enforce their ethos, and to root out heresy or threats to the faithful (wait -  they don't fight to gain treasure, gain experience and protect their friends?  what kind of cleric is this anyway? ;)  Clerics use their magic to support and strengthen their allies, and they wield their weapons to defeat their enemies. They wear armor and carry shields to withstand their enemies' attacks, which allows clerics to use their magic to protect their companies rather than needing it to save themselves. (yeah, sure - trust me, they'll be using magic to save their own ass too)

Keep in mind that these goals are guiding principles for the typical expression of a class. One of the concepts we've embraced is the idea of creating starting points, but then allowing a lot of room to maneuver for players who want to tinker with mechanics or who prefer to craft their character's story first, then find mechanics to match that story second. As I mentioned at our PAX East seminar, our battle cry is "Don't get in the way." The basic idea behind that approach is that we create a starting point, but then give players the options and tools to modify their characters as they see fit. (i guess I need to find time to watch the PAX video... or just find a transcript)

For instance, in a playtest I created an elf cleric of Apollo who was a skilled archer, woodsman, and scout. My character wore leather armor, carried a bow and a dagger, and spent the session sneaking ahead to spy on monsters, climbing a tree to escape an enraged ogre's reach, and hiding in a dark corner to ambush a gang of monsters drawn out by the rest of the party. You can easily create a cleric with a mace, healing spells, and plate armor, but you can also use the character customization options to sculpt your character. Keep in mind that I created this character before we had god-specific mechanics in the game, so this level of customization exists for all characters. I didn't gain access to it only by picking a domain or set of spheres for my character's god. (not sure I'd ambush anybody in leather and a dagger, but whatever floats your boat)

By the same token, we aim to make sure that players can choose a set of options that match their preferred tactics. You can imagine having a set of healing spells that allow you to aid your allies while still attacking, while also having different spells that take your entire turn (i'm not sure what his means - take your entire turn - entire turn to cast or lasts an entire turn - is a turn the same thing as a round, or equal to 10 rounds?  or some other number). As a player, you can decide to focus on serving as a healer, choose to straddle the middle ground between fighting monsters and helping your allies, or even opt to pick spells such as bless or lance of faith and then emphasize the warrior aspect of your character.

At the end of the day, our design goals represent the primary goals for the archetypal expression of a character class. They're the starting point that we're aiming to bring to life while leaving room for players to tell their own stories and craft their own unique characters.  (which is a fine and lofty goal.  so, when can we expect an updated collection of "Complete Hnadbooks" ala 2e?)
Posted by Tenkar at 8:32 PM