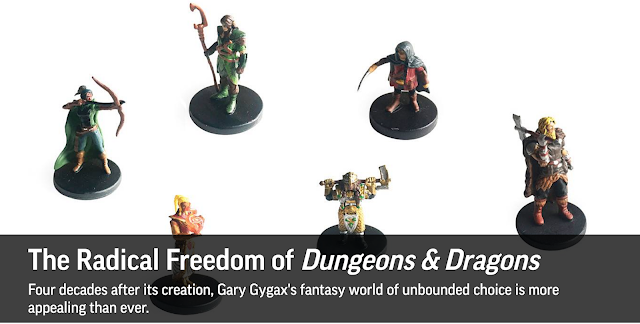 
You might not recognize the name Gary Gygax. But even if you've never rolled a critical fail on a d20, you have almost certainly consumed some movie, TV show, book, comic, computer game, or music influenced by Gygax's most famous creation: Dungeons & Dragons, the world's first and most popular role-playing game.

The FBI certainly knew who he was. Between 1980 and 1995, agents compiled a dossier on the gaming company TSR Inc. and Gygax, its founder. In 1980, a note on TSR stationary about an assassination plot drew the FBI's attention, leading to a search of the company's offices in Lake Geneva, Wisconsin. The note turned out to be materials for an upcoming espionage game.

In 1983, an FBI field report about an investigation into a cocaine trafficking ring in Lake Geneva cryptically references Gygax—but whatever his alleged role was, it has since been heavily redacted by the Bureau.

The company appears again in FBI reports from 1995, as part of the agency's sprawling investigation into the Unabomber. The FBI was apparently looking into a possible tie between the string of then-unsolved bombings and a bitter legal dispute between TSR and a rival gaming company in Fresno, California.

In an FBI field report describing the convoluted history of TSR, one source at the company describes the father of role-playing games as "eccentric and frightening," a "drug abuser" who is "known to carry a weapon and was proud of his record of personally answering any letter coming from a prisoner." He would be extremely uncooperative if the FBI tried to interview him, the source warned.

The report also claims Gygax set up a Liberian holding company to avoid paying taxes and "is known to be a member of the Libertarian Party."

The above is only a small sample of the article linked above.

As for the unnamed source in the FBI field report, I think most anyone with a basic history of Gary's departure from TSR could make an educated guess ;)
Posted by Tenkar at 11:34 PM