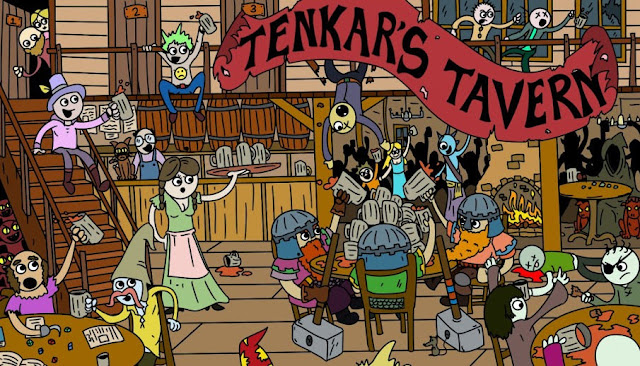 The end of May - May 31st to be exact, will be the Ninth Anniversary of Tenkar's Tavern. We've come a long way as a community in those years, with a highly successful Facebook Community (nearly 2100 members) and a Discord Community of over 400 very active members. Join us for a Wednesday Night Tavern Chat and see for yourself just how active we are ;)

Not to rest on one's laurels, I have some ideas in the works to show the community how much they are appreciated.

As I've mentioned before, I'd like to start running monthly Roll20 sessions of Swords & Wizardry Light aimed at players both new to the OSR and new to gaming on a whole. The sessions won't be limited to just new players though, but they will be given priority seating. I'd like to kick that off in early May, give or take a week or two.

On the Tavern Chat side of things, I'd like to add a monthly session that is scheduled to accommodate those "across the pond" - the UK and the rest of Europe as well as one for our Aussie and Kiwi friends. So, one month UK friendly, next month "down under" and so forth.

I would also like to set up a once a month "Chew the Shit" session on Discord that would be recorded and released as an audio podcast. This would NOT replace the regular weekly Tavern Chat.

Another new feature I'd like to add is short (5 to 7 minute long) videos released Monday / Wednesday / Friday about various OSR topics that are on my mind that I feel work better spoken as opposed to written. I expect some will very much be "string of consciousness" in nature. This could be very hit or miss but the potential entertainment value could be priceless ;)

So, those are the current plans for the next few months.

Again, thank you all for the support over the years. I appreciate it more than you could ever imagine.
Posted by Tenkar at 6:00 PM