Kickstarter - Dead in the West: A Tabletop RPG set in the Mythic Old West 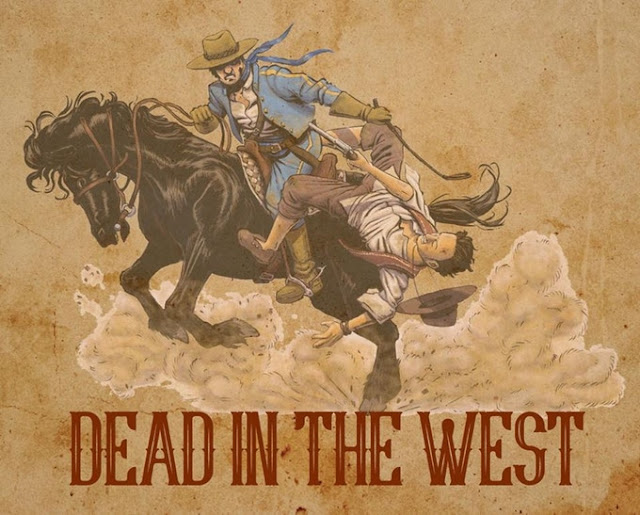 I have a soft spot for Old West history and mythology. It is very much the fantasy medieval age of Americana. Which puts me at an awkward juncture with the Dead in the West: A Tabletop RPG set in the Mythic Old West Kickstarter. I want it to succeed due to the subject matter, but I think it has priced itself out of successfully funding.

First, we have a lot of firsts. First Kickstarter created. One Kickstarter backed. First game written. The only thing balancing against this is the creator's passion - he certainly has faith in his project.

Second - pricing. With a goal of just over $10k in USD, it's a lot for no track record. More worrisome is the backers' levels. $25 for the rulebook in PDF and the Quickstart in PDF - and a mention on Facebook. $25 for a PDF from an unknown creator? And could someone tell me what the value of such a mention is on Facebook if the one doing the mentioning has little if any following? I mean, even WITH a following of noticeable size it has little value IMHO. Print plus PDF is $37 USD - but add in shipping and its more like $60. Oh, and we don't know the size of the book or the actual game mechanics (uses d8s if you read the FAQ)

There is a lot being asked of backers with little more than a dream presented in return. Yes, I know Kickstarter is very much about fulfilling those dreams, but this is one dream that will never come to be.

Dead in the West: A Tabletop RPG set in the Mythic Old West is at about 42% of funding with a week and a half left to fund. Short of an "Angel Back" or six, this project is going back on the shelf.
Posted by Tenkar at 11:18 AM