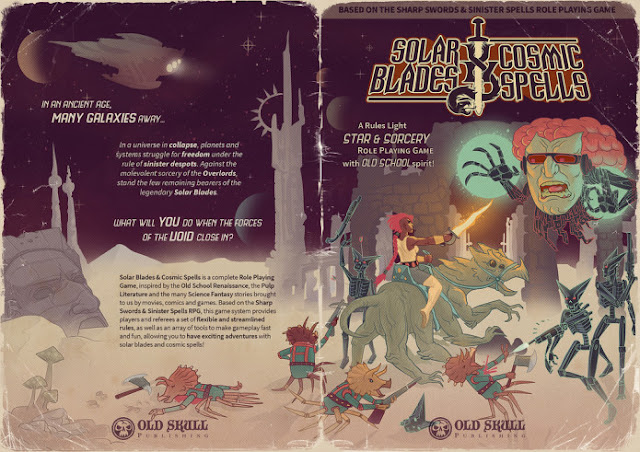 
It’s science fiction, it’s fantasy, it’s space opera, it’s sword and sorcery, it’s post-apocalyptic. It’s all that and more, mixed up and packed together. In this game the party can be composed of knights of a mystical tradition, space pilots, cyber hackers, smugglers running from space authorities, barbarians from a primitive world, engineers and inventors, students of the lost and dangerous art of cosmic spells, or anything in between all this. In this universe, technology is advanced but the great accomplishments of it were lost in a glorious past. Sorcery is real and is wielded by terrible despots. It is also feared by most of the species, being the main reason why the old glorious days are over. Planets and sectors have many different cultures, most of them are now divisive and belligerent, led by these Sorcerer-Emperors. It’s sword and sorcery in space and with some cosmic horror thrown in.

The above pretty much sold me. Don't get me wrong, Diogo Nogueira does good work. Sharp Swords & Sinister Spells, upon which Solar Blades & Cosmic Spells builds upon, is an excellent ruleset. I just expect SB&CS to bring it all up to Eleven. 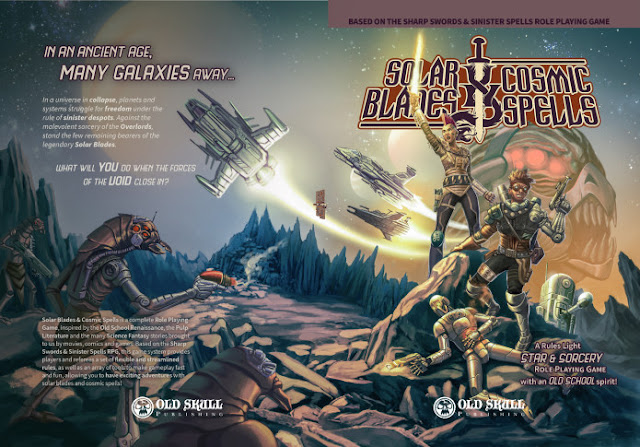 The gonzo artwork fits the premise perfectly. And of course, it has that Old School spirit:


Although not directly related to an old game, Solar Blades & Cosmic Spells was designed to be played with the same spirit and style. All the principles of the classic A Quick Primer for Old School Gaming by Matt Finch apply to this game (and if you don't know about A Quick Primer for Old School Gaming, you should google it), although this is not a proper Retroclone. It does take inspirations and is based on many games that are (and some that are not), and other actual Old School games. However, to avoid the controversy of calling itself an Old School Game, Solar Blades & Cosmic Spells calls itself a game with Old School Spirit.