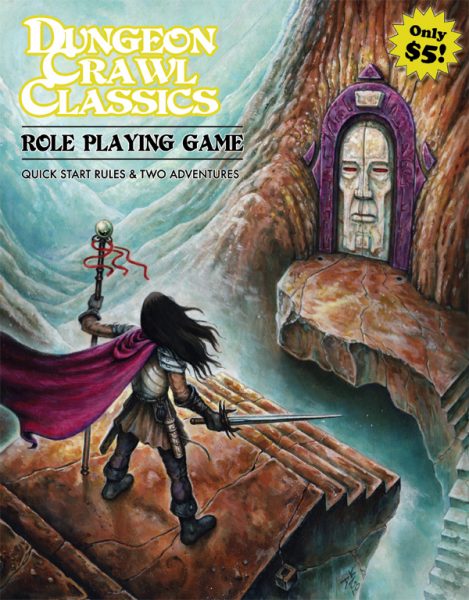 Before you ask - yes, these are the same rules that were given away for Free RPG Day last month (the same day I got rear ended on the way to my FLGS - so THIS is how I'm getting my copy)

The DCC RPG Quickstart Rules cover the DCC RPG rules from Level 0 to Level 2 and includes both a classic funnel and a NEW Level 1 adventure.

+Jim Wampler is the one that took Joe Goodman's original work and whittled it down to something slightly simplified and hopefully not as intimidating as the full DCC RPG rules.


At long last, the DCC RPG quick start rules! Only $5!

These starter rules were written specifically to introduce judges and players to the DCC RPG system. In some areas, rules have been condensed and simplified. These rules will serve primarily to get characters through their first level 0 adventure and their first level 1 adventure. Although the rules go up to level 2, for the full DCC experience and play at levels up to 10th, please refer to the Dungeon Crawl Classics RPG rulebook!

This book includes two adventures! You get the enduring classic Portal Under the Stars 0-level adventure for new players, plus in a flip-book format, an all-new level 1 adventure, Gnole House by Michael Curtis, inspired by the works of Lord Dunsany and Margret St. Clair who first wrote of the creature called the “gnole,” which Gary Gygax later evolved into the better-known gnoll!

With shipping it came to 10 bucks. Maybe I should have added an adventure or three, but I was just too excited to be able to order the DCC Starter rules (which is more accurate than Quickstart in my opinion, as you get to level and explore what a campaign actually is)

Nope, no affiliate money changes hands here. Goodman publishes excellent products. I expect this to be nothing less than excellent.
Posted by Tenkar at 11:43 PM