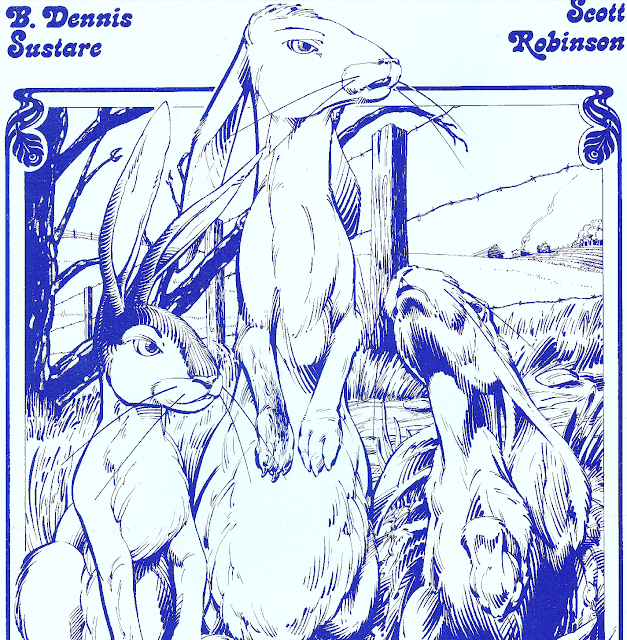 Friday night I was asked an important question: "Do you know of anyone that might like to playtest the Bunnies & Burrows Light rules?" What a loaded question! I spent hours talking with Dr. Sustare one night at NTRPG Con about Swords & Wizardry Light, a new edition of Bunnies & Burrows and the idea of Dennis putting together a "Light" version of the Bunnies & Burrows rules. My answer was "Send me the rules and I'll run it tomorrow night!" and they did and I did.

I sent the rules, character sheets and cards to my Saturday Night Irregulars and assembled out bunny posses. We had three bunnies. I suggested someone name one of their bunnies Hugh Humpalot but wisely no one bit at it.

The bunnies, all young, had to find some Rabbit Flower at a nearby marsh to help heal their den mother who was suffering from an as yet undefined disease.

- didn't find and didn't fall into a trap.

- hopped / climbed a tree for a better view, as they had no map (bunnies don't map) and just a vague direction of the marsh they needed to locate.

- were pounced on by a persian kitty who got rabbit punched to an early grave. Rumors that humping bunnies were running amok after their victory is greatly exagerated.

- located the marsh ad Rabbit Flower, but now it was dark

- drove a snake from the hollow of a tree trunk so they would have protection from predators over the night's passing.

- found and fell into that trap they missed the first time

- got the Rabbit Flower to their mother in times to heal her.

Created characters and ran the adventure in about 2 and a half hours with another 15 minutes of post playtest critique.

Email ThisBlogThis!Share to TwitterShare to FacebookShare to Pinterest
Labels: bunnies and burrows, playtest