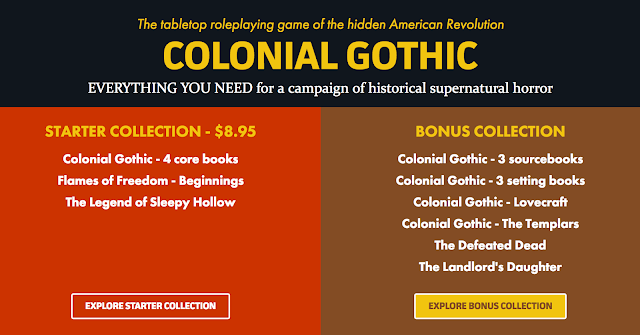 Colonial Gothic is one of those games that I've picked up occasional pieces of over the years because of my love of history and the twist that Colonial Gothic gives to it. An opportunity to pick up over a dozen books for it for about 20 bucks is simply a no brainer.

The way I see it, you don't even need to use the system behind the books to enjoy the books (I probably won't) but I could see myself hacking Swords & Wizardry Light to run something like this.

Damn these useful Bundles of Holding!

This one has a short window - just over 2 days left.


Hero! The Founders bring you the Colonial Gothic Bundle, featuring the new Third Edition of the supernatural flintlock-horror tabletop roleplaying game Colonial Gothic from Rogue Games. Uncover the secret history of America's 18th-Century frontier, where monsters stalk the woods and ghosts haunt every sleepy hollow. This bargain-priced offer brings you almost the entire Colonial Gothic line -- everything you need for a complete campaign of magic and mayhem in the shadows of early America.

For just US$8.95 you get all six titles in our Starter Collection (retail value $40) as DRM-free .PDF ebooks, including the complete Colonial Gothic Third Edition rulebook (retail price $10), three essential supplements (Gamemaster, Adventure, and The Player Companion, total retail $21), and the 174-page Beginnings adventure (retail $8) that kicks off the massive Flames of Freedom campaign that will encompass the entire American Revolution. NEW! We've just added The Legend of Sleepy Hollow (retail $1): Washington Irving's classic 1839 story of a haunting in upstate New York, plus gaming notes adapting it to Colonial Gothic.

And if you pay more than the threshold price of $20.59, you'll level up and also get our entire Bonus Collection with almost every book in the Colonial Gothic line -- ten more supplements worth an additional $70:

Lovecraft (retail $7): Bring the Cthulhu Mythos onto the American frontier.

NEW! The Defeated Dead (retail $8): A ghost story of vengeful soldiers at the site of the US Army's greatest defeat.

Note, although OneBookShelf delivers copies of these PDFs, I do not make affiliate monies from these sales. I bring offers like this to your attention because I think they are amazing deals and I'd hate for my readers to miss out on them. You can always buy me a beer later ;)
Posted by Tenkar at 10:48 AM