Why Play a Retroclone When You Can Get the Original Rules via Print on Demand? 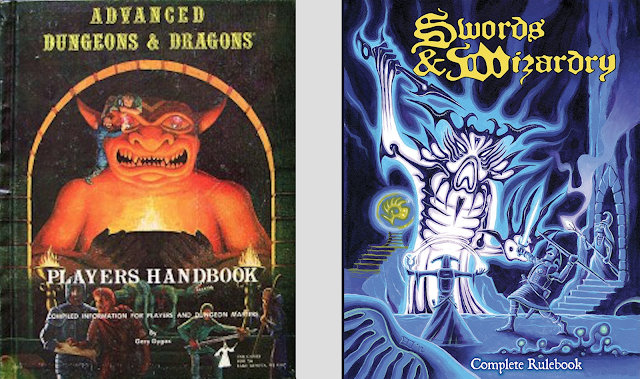 Its a valid question now that the AD&D 1e rules are available via POD - why play retroclones when you can play the originals?

I'm sure everyone has their own answer to this question but I'll give mine for what little it is worth:

Twice a month, on Thursday Night's, I play in a very wacky, drop in - drop out, AD&D 1e campaign. The group consists of grogs that have their original rulebooks right through to Pathfinder players who have grabbed copies of the rules from eBay.

AD&D 1e is so ingrained in my brain's synapses that if there is a rules question, our DM Tim often just calls out to me for the answer, which I usually know off the top of my head. I played it from 1980 to 1989, when 2e released (being a new edition, 2e HAD to be better, right?). I never memorized the 2e rules like I did the 1e rules. I guess you first love when it comes to RPGs makes a real impression in your mind.

See, I had found Swords & Wizardry, a ruleset that ran almost exactly as we ran our AD&D 1e games back in the day (fudging "segments" and interrupted spell-casting, ignoring weapon vs armor type adjustments, ignoring reaction rolls, total confusion about weapon speed and so much more). So, S&W ran like we houseruled our 1e rules (we didnt call it houseruling back then) without all the extras that we literally didn't need and never used.

These days, I can run a S&W session without opening a book. My players? Pretty much the same. Its better written, better organized and simply easier to learn than the source material. 468 pages for the AD&D 1e core trio of rulebooks vs 144 pages for the Swords & Wizardry Complete 3rd Printing.

Could I have tweaked 1e or BX down to a playable 4 pages? I highly doubt it.

Are retroclones for everyone who has played the originals? Hell no! Nostalgia is a strong force to recon with. Retroclones are a viable alternative to the originals for many of us, and there is no rule that says you can't enjoy both the originals and the clones they inspired.