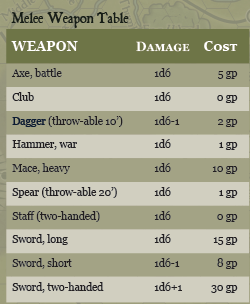 One of the first things you'll notice about Swords & Wizardry Light (SWL), after its small size, is that it only uses two sizes of dice - d20s and d6s. Newer players often have trouble differentiating between the different sized polyhedral, and using just two sizes of dice simplifies things greatly.

One result of this is that monsters, which have a d8 for Hit Dice (HD) is Swords & Wizardry Complete (SWC), now use a d6 for HD in SWL.

That changes the power curve, right?

When we consider optional rules that will allow higher level casters, spells like Fireball and Lightning Bolt will become more powerful if not tweaked - area effect damage spells that potentially effect a full HD per die, not 3/4s of a full HD as it is in SWC. Something to think about as we move forward.

If you are converting a monster from a monster section, monster bestiary or such, remember to roll the Hit Points (HP) using d6s. Monster damage will be rolled using d6s also. So, 1d4 becomes 1d6-1 and 1d8 becomes 1d6+1. For larger damage numbers, add the low end of the damage indicated to the high end. Divide by 3.5 - this is the approximate number of d6s it converts to.

To adjust the Hit Points (HP) of the monster in question for an adventure, for each HD of the creature (assuming a d8 for the HD size in the source material) subtract one HP from the total of the creature. If the total is still higher than HDx6, either lower the total to HDx6 or subtract one HP per HD again. Obviously, the first option give you a much stronger adversary.