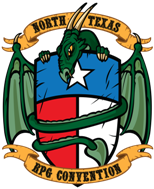 NTRPG Con Game Event Registration goes live 1AM Friday Morning (April 15th, 2016) - so stay up late tomorrow night ;) There are already 290 folks registered for the con with just 60 slots left open. If you plan on going, time is running short.

I (and probably a few others) will be running some games "off the grid" in The Tavern's OSR Community Room (Trinity I). My plan is to run at least one session of White Star / Star Slinger and possibly a session of +Pete Spahn 's WWII: Operation WhiteBox (I have a beta version of the rules, so even if it isn't released by then we can still get a session in).

Games at The Tavern's Table will be scheduled AFTER April 15th, as I see where I'm at in regards to games I'm registered for as well as some other Tavern readers. I'm planning on 1 game each on Thursday, Friday and Saturday from the official grid, which leaves plenty of time for off the grid gaming (including Wednesday Night and Sunday)

We will announce The Tavern's Table Games here on the blogside, as well as 2,000 Coppers on G+ and The Tavern's Facebook Community. The G+ and Facebook Communities are also the place to ask to reserve table time off the grid if you'd like to run something. I'll be blocking out time at the table for the use of various podcasts and podcasters, but there should be plenty of time for gaming.

Oh, and plenty of Drinking Quest in the evenings. +Tim Snider says so ;)

As a side note, there will be a bonus Tavern Chat kicking off around midnite tomorrow as I get ready to register myself and Rach for games.
Posted by Tenkar at 7:42 PM