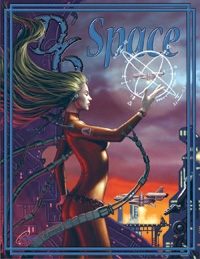 Well, this is interesting news. I know West Ends Games (WEG) had been for sale by Eric Gibson for a while but no one before had been willing to pay the asking price (don't ask me how much, I do not know).

The d6 System has been open and free for years (bundle of free d6 rulesets here) and now Bill Coffin's Septimus Setting is free too (over 360 pages and a fair amount of WEG drama over the years). There will soon be POD versions of the d6 Core books and Septimus which is damn good.

The Open d6 System is a good one. I'm happy it will see some attention in the near future.

As for the man behind Nocturnal Media, it's the original White Wolf himself - Stewart Wieck.

NOCTURNAL MEDIA ACQUIRES WEST END GAMES
April 13, 2016
I’m pleased to announce that I have purchased West End Games (WEG). Founded in 1974, WEG initially published a number of wargames and a decade later branched into roleplaying games, including the first Star Wars RPG as well as original (very original!) works, such as Paranoia and Torg.

My nostalgic ties to earlier days of roleplaying games and companies made this opportunity impossible to ignore. I believe WEG stands in the company of other great RPG publishers of the 1980’s and 90’s like my prior company, White Wolf, as well as Chaosium. This is due to the wonderful games WEG published and especially because of the outstanding designers who created those games. In my pre-Vampire: The Masquerade days, I wrote for both Star Wars and Torg and found WEG an extremely hospitable and well-paying home to freelancers.

While the majority of the iconic West End Games properties have already found other homes, WEG still owns the D6 System as well as a handful games, mainly hex-and-counter wargames. The D6 System remains available under an open gaming license as Open D6.

Departing owner of WEG, Eric Gibson told me, “I look forward to a new era, as an eternal fan, for West End Games and related properties.”

While Eric’s efforts to revive WEG after he purchased the company in 2003 didn’t bear the fruit he surely hoped, he served the fans well by putting the D6 System into OGL and by offering the core books as free downloads on DriveThruRPG.com. The three main books D6 Adventure, D6 Fantasy and D6 Space are all as part of the convenient D6 Core Set bundle download.

Also still available as a free download on DriveThruRPG.com following my acquisition of WEG is creator-owned Septimus by Bill Coffin. This enormous Space Opera setting book is 350+ pages long and features cyberpunk, mecha and a huge Dyson Sphere “universe” to explore. The setting is supported by the Septimus QuickStart that includes the introductory adventure “Flight of the Argosy” and four pre-generated characters.

"I am thrilled to see Stewart bring the D6 family of games to new heights, and to new fans," says Bill Coffin. "I know Septimus fans will be excited by this news, and I hope this will be the start of big new things for D6 science fiction gaming."

Plans for the D6 System are still in development, but I invite fans of the system to comment and make suggestions in the Nocturnal Media forums. In the meantime, the long out-of-print core rulebooks will soon have print-on-demand (POD) versions available on DTRPG. A POD version of Septimus will follow shortly thereafter. Other books will surely follow.

To celebrate this rebirth of West End Games, the next Nocturnal Media project on Kickstarter will be a new edition of WEG-great Greg Costikyan’s Web & Starship. First published in 1984, this asymmetrical game was built from the ground up for three players. Published with Greg’s consent and involvement, the new edition will feature higher quality components than the original as well as include a number of tools to ease play, such as a chart of star distances to replace the need for the Range Finder.

The Web & Starship Kickstarter project will launch at noon CST on April 19th. Sign up for notices from Nocturnal Media at the bottom of the home page to receive more news.