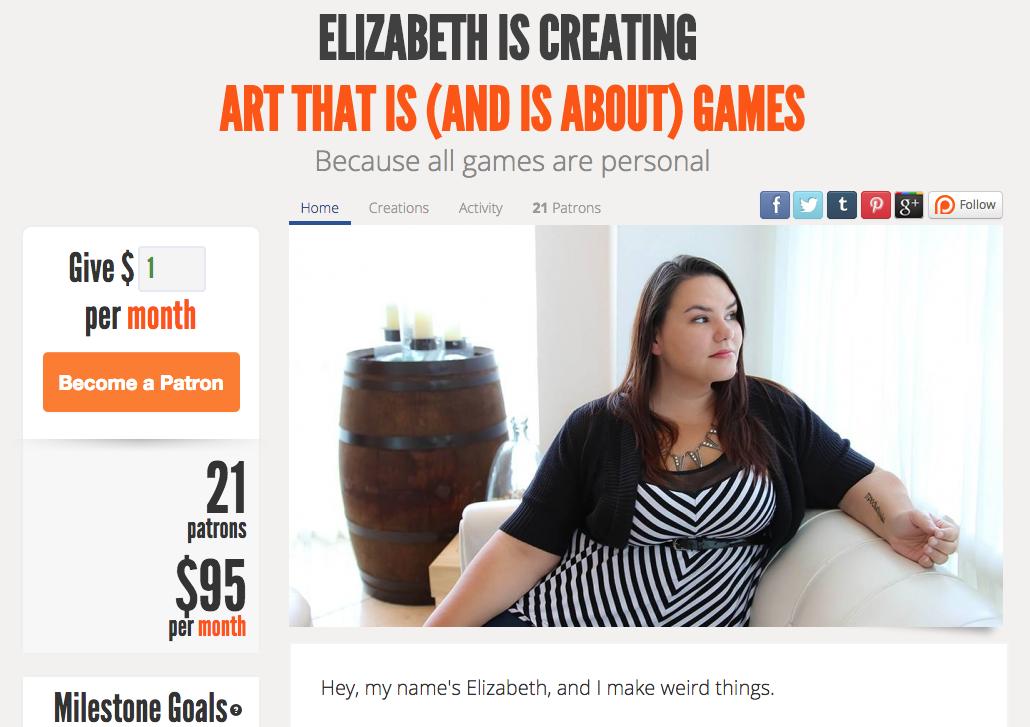 Lets see, Elizabeth links to some of the games she's written. Strangely enough, They Became Flesh is not mentioned. Heck, her last update on the They Became Flesh Kickstarter was in October of 2013. Latest comments on the Kickstarter? From folks still waiting for their shit.

Oh sure, her husband has steadfastly taken blame for her failures, but the Kickstarter project, just like this Patreon project, are her's and her's alone.

Maybe she should set a milestone to make good on the promises she made to her Kickstarter backers. Or would that not be personal enough?


I make games: I started in 2007 with my self-published indie roleplaying games and eventually transitioned into digital four years ago. My games are digital and tabletop, personal and searching, and occasionally win awards. A good example would be Deadbolt, an art game about personal truth that you can read about in the LA Times. I have a bunch of stuff in the works I'd like to give you a sneak peek at.

I make waves: I'm well-known for my advocacy for women in the game industry— I was on the inaugural #1reasontobe panel at GDC, I've appeared on podcasts and traveled the country talking about how to create and support diverse companies and inclusive games. I was the one who wrote that article you read about why you shouldn't support PAX, and the one who wrote the article about Zoe Quinn, and a bunch of other articles that went viral. (I've got the hate mail to prove it.)

Again, maybe she should be advocating for the backers of her still unfulfilled Kickstarter.

Shit. I'm obviously missing the boat on this Patreon thing. $95 a month and still not making her backers complete.