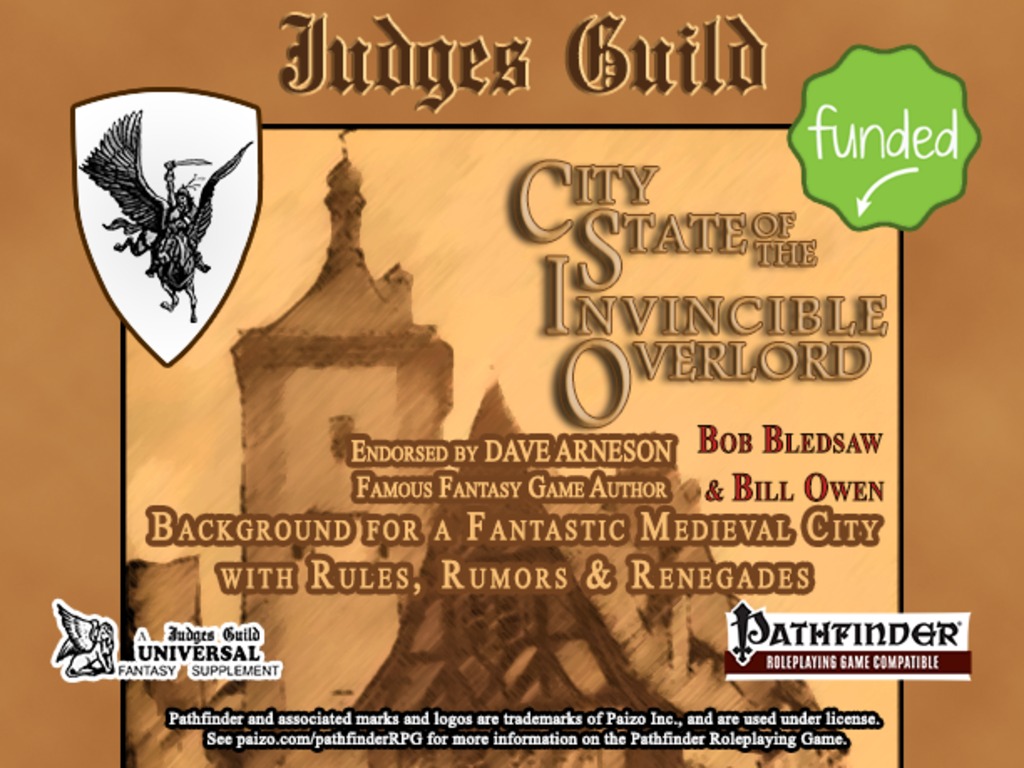 It seems like few Kickstarters escape intact when meeting their enemy - reality.

Here's the latest update from the City State of the Invincible Overlord Kickstarter. I'll comment at the end.

Hello Backers,
There going to be a lot to this update, so I apologize for that. This is going to be visible to anyone (the last few have been for Backers only) so I want to bring everyone up to speed.

Campaign Map Progress: For those that don't know, the first 10 maps have been released electronically. We have the first 5 or so in print. We've had to halt progress on the maps until February because not enough people bought into the Miniatures (we lost about $16k on those) (emphasis mine). We didn't realize this until it was too late due to waiting for all enough of the survey responses to come in. We're still waiting on some final number crunching to give the go-ahead to continue the Campaign Maps.

Miniatures Progress:
The Miniatures are brilliant. We had a sample to bring to Gen Con last year. Everybody loved them. The quality is really superb. Despite the hit we took on them, we are still happy that they were made. Mick Leach with Eastern Front Studios has confirmed that a number of them have been received already from the casters mid-December. I'm awaiting word from Mick as to when the rest of the models will come in so we can start shipping those with the maps, etc.

CSIO Book Progress:
Murphy's Law: "Everything that can go wrong will go wrong." In July, we basically needed to do the finished layout with all the art. We still had a good 3 months to get this to the printers, and 4-5 months to fulfill, so we thought it would be great to bring in James Mishler, a walking encyclopedia of Wilderlands knowledge (seriously, his knowledge (Wilderlands) skill is +18), to collaborate with Bob III on expanding even more of all four parts to this book: the City State, Wraith Overlord, Thunderhold, and Modron.

We knew we were taking a gamble. Everyone was willing to support this if it meant getting a nice, polished, expanded expansion of Wilderlands goodness. We jumped in with both feet and were off to a great start. In September, James' wife had to have surgery. It took her a good 6 weeks to recover and for James' to be back in a position to press on. We've since had to push back the deliver date twice. Which brings us up to today.

A Word from James:

It’s never easy to admit to defeat; it is more than doubly-so when one has failed twice at the same endeavor, as I have with working with the City State of the Invincible Overlord and the Wilderlands of High Fantasy.

But at this point I have to admit to defeat, in the case of re-writing the City State of the Invincible Overlord for the Judges Guild CSIO 2014 Kickstarter. I have tendered my regrets and apologies to the Bledsaws at Judges Guild, and wish to do so now to you, the fans and supporters of the Kickstarter.

There are all sorts of reasons I could mention here; all explanations rather than excuses. Suffice to say that my days of working with Judges Guild, the Wilderlands, and the City State in my past should have remained there, in the past.

Unfortunately, I thought I could return to those glorious days when I published under Adventure Games Publishing; sadly, the truth was I needed an exorcist to rid me of the haunting ghosts of failures past, rather than a resurrectionist to dredge up the bodies of the unquiet dead. Every attempt to go further with the manuscript resulted in an avalanche of dreadful memories and unpleasant thoughts, and brought all advancement to a screeching halt. My joyful expectations were overwhelmed by the potent recollections of previous failures.

And so, after a brief if glorious surge of creativity, my ability to work on the manuscript died a hideous, ignominious death. In fact, my desire to do much of anything with gaming sunk to lows I’d not experienced since the end of AGP.

Once my wife recovered from her operation, and I’d gotten new, regular hours at work, I’d hoped things would change… and though I was able to write once again, every time I turned back to the CSIO manuscript, the whole world crashed in again, and turned hope to ashes.

I have delayed the inevitable long enough.

I wish Judges Guild nothing but the best of luck, in this and all future endeavors.
To the fans and supporters of the Kickstarter I say, nil desperandum! Do not despair! One small man’s failures do not bring down the whole, not when there are heroes ready to leap into the breach. Though there will be further delays, I am sure that the City State of the Invincible Overlord Kickstarter will complete, and Judges Guild will go on to even greater things. And as the maps that have already shipped have proven, their new works will awe and amaze you.

So, yeah. That happened.
This has completely taken us by complete surprise. In fact, we are still at a loss for words. We are going to have a meeting this weekend to revise our action plan and divvy up some additional responsibilities among Bob II, Bob III, and some of the other family members here. We are too far into this to let yet another stumbling block cause us to fail. As requested by backers, we are definitely going to be making the PDF version of the CSIO book available ASAP. We will add a spreadsheet on Google Docs to allow you all to add any corrections you find on each page (brilliant idea Bevan Anderson!). Tentatively, we have not decided to push back the deadline further. Once we convene on an action plan this weekend, we will update all to that effect.

There's a whole shitload to digest in that, but the one thing that really stands out to me is that they lost $16k on the miniatures. Holy shit! That is a huge loss that should have been run as their own Kickstarter. I'm not sure if that's $16k worth of lead that can possibly sell down the line or if it's $16k pissed away in the wind and all over one's pants leg.

As for James leaving the project, his wife's health issues were / are significant. Her recovery is ongoing. It's a hell of a load to bear, and the Mishler's are in my prayers.

Looking at the lateness of the Kickstarter itself, it's barely a month and a half late, which in Kickstarter terms means it isn't even expected yet, especially with all of the stretch goals hit.

I'm stuck wondering why they even offered miniatures in the first place? Didn't Reaper Bones I & II produce enough inexpensive plastic to saturate the market?
Posted by Tenkar at 8:00 PM